One of the dilemmas when moving to Italy without great (over even solid) language skills is that you’re spotlighted with a “tourist” tag. This means it can be hard to get pointed in the direction of restaurants (tavernas, osterias, ristorantes, and more) that locals actually eat at (as well as not being invited to stomp grapes—does that even happen anymore?). Luckily, Andrew and Marianne (if you don’t know they’re our jolly landlords yet, then you need to read more posts) have lived in this area for oh, 25 years, and so they are definitely locals, and were nice enough to take us to lunch recently (full disclosure: this is the second time they’ve taken us here, but the first time I didn’t want to get camera crazy) at Mastro Dante, in Coldipozzo, which is frequented by locals only (or at least not caught on to, or appreciated, by tourists): 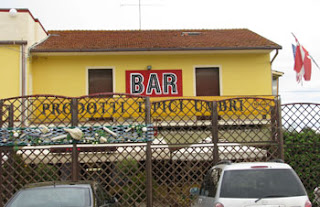 Mastro Dantes reminds me most of a truckstop you’d find in Kansas. Not necessarily on the food quality scale (though there are some truck stops that serve up wonderful roadside cuisine), but on the clientele, which weighs heavily on single working men stopping in for a filling meal, as Mastro Dantes is in an industrial zone. It also serves up a no-frills, but full of flavor, luncheon. It’s a set menu, with a couple pasta choices, a couple secondi choices (usually three of the former and two of the latter), and an antipasta bar. You can get a bottle of wine or a beer, too, all for 12 euro. Dolce and coffee is extra. A fantastic deal, I must say, because you never leave less than full and the wine bottle is per person. When we went recently, we skipped the secondi (cause it’s meat-tastic), but loaded up at the antipasti/contorno buffet: 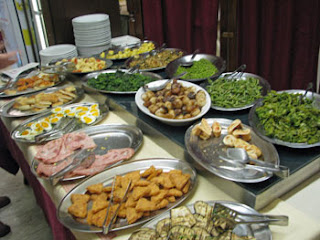 Here are my picks: 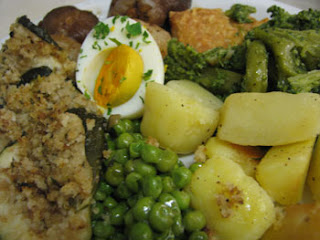 Then both Nat and I had the orecchiette (or little ears), which had chunks of potato and leek (porro) in it and was hearty and tasty: 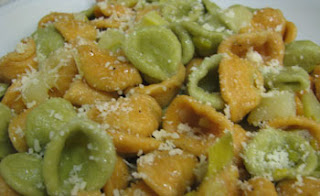 Andrew and Marianna did get the secondi, and went with the goose with roasted potatoes (shown here for meat-eating pals): 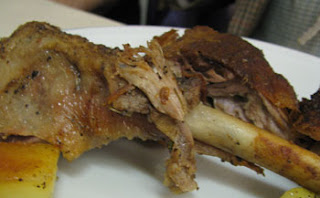 Everything was served up right, and brought hot to the table (except what we picked from the buffet) by our friendly waiter (who could slip in some English as needed)—not only friendly, but well-dressed: 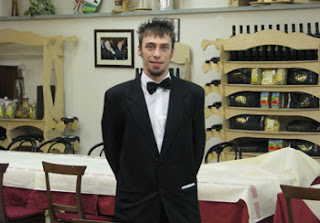 Though you’d think we’d be stuffed to the gills, Nat and I decided to try Mastro Dante’s dessert options as well (hey, we’re on pre-tirement, don’t judge), with Nat getting the panna cotta and me getting some crème brulee (though I think it had a slightly different name). Both were sweet delights:

The Mastro Dante experience was both homey and yummy, with a welcoming atmosphere that drove nostalgia for the Midwestern truck stops of my youth. And, we got to eat with, and feel like, locals. Now before signing off, I want to use a last moment and a couple photos to woo my meat-eating pals who might be coming to visit, or who are weighing it out. See, at Mastro Dantes, you can also order up a meat plate from the meat case (notice the red peppercorn encrusted salumi) and/or the haunch of pancetta: