Rainbow Over the Niccone Valley

We often wake up to a grey foggy morning on top of the hill, and sometimes to bright blue skies and sun, and here and there to a little rain. But maybe most often we wake up to a little sun and light fog, which soon clears off at the top of the hill where we live. The fog sticks around longer though, in the valley, so often we walking down the hill in the morning, I (or we) go from sun into fog, with the fog thickening as we head into the valley, making it a little eerie as the trees slowly take shape (especially eerie when the hunters’ guns are booming out of the fog). Only once though, have the various elements combined to create a rainbow, which looks as if it’s ending up in the town of Lisciano Niccone (in this scenario, Bar Fizz is probably the pot of gold): 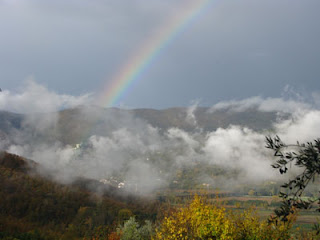 I took this picture about 8:30 in the morning from by the pool in our backyard, and I’d go on and on about how beautiful it was, but I think the highbar for rainbow talk was already set by this guy.
Posted by A.J. at 9:08 AM