Dinner at Da Cesari in Bologna

Way back when, before we even made it to Italy, I wrote a little post on this very blog about how excited we were to be able to re-visit a restaurant in Bologna called Da Cesari (the post had a picture of their rocking ravioli). Well, we finally made it back (turns out, a two hour drive and many hour meal is a bit harder to schedule than one might think, due to having to find a watcher/sitter for Sookie and Rory. You’d think they might be able to stay home alone, but that kind of wild party might make landlords Andrew and Marianne give us the boot. Luckily, neighbor Doris was kind enough to watch over the pooches). 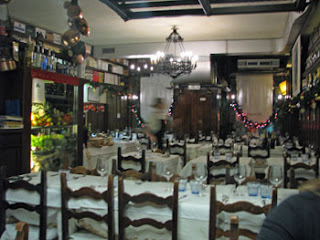 For a little more backstory, the last time we were in Italy (April, 2009), we stopped in Bologna. We’d never been before and thought it well worth checking out, and ended up really enjoying our stay in the city. The highlight (as you might expect) was the best meal we had while there, which was also perhaps the best meal we had that trip, a dinner Da Cesari. I detailed this meal in a Da Cesari post on Spiked Punch, and also rambled on more about a particular ravioli on Amazon.com’s Kitchen blog, Al Dente. At this first visit we also made friends with the second in command at Da Cesari, an outgoing and amazingly personable Italian gentleman named Gaetano. We’d stayed in loose touch with Gaetano since then, and he was great at helping us set up this most recent dinner and our latest trip to Bologna. Look how nice he is (especially when holding a big bottle of homemade mirtillo—or blueberry--grappa): 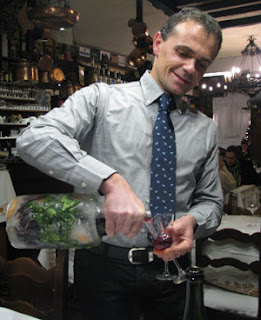 I could go on and on about how amazingly nice the whole crew that works at Da Cesari is (from Mr. Cesari himself to waitress Sylwia and even to past employee Veronica who we met after dinner), and how the restaurant is a Bologna institution that’s been there since the 1950s (started by the current Mr. Cesari’s dad), and how the region it’s in (Emile Romagna) is famous for its cuisine, and how sweet they treated us, but I know you want to get the spotlight shifted over to the edible attraction, so I’m going to cut the chatter (well, as much as I can--which, if you’ve read this blog before, know isn’t much) and get to the goods. We started with a glass of silver-hued Prosecco that matched the holiday decorations, but quickly moved on (not because the Prosecco was poor, mind you, but just because there was much more to be had) to the family Lambrusco, which was a true traditional Lambrusco from Castelvetro, dry and with mucho frizzante: 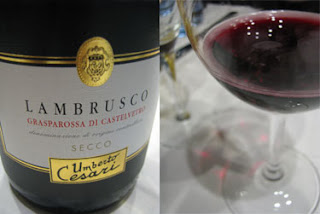 Another quick side note before getting to the starters: there is Da Cesari, the ristorante we’re at, as well as Cesari, the winery, which is run by Mr. Cesari’s brother (who I suppose is also Mr. Cesari). The ristorante is well-stocked as you would expect with the family-named wine, but you can also get Cesari wine in many spots worldwide, so look for it. Okay, don’t be jealous (well, a smidge is fine), but since we are pals with Gaetano, we somewhat managed a special set up of a menu, starting with a combo appetizer plate that was stunning. It featured Nat’s favorite pumpkin pie (which isn’t the traditionally Thanksgiving pie, but a creamy masterpiece with a thin flakey crust. It has the same melt-in-your-mouth-ness of a good sweet pumpkin pie, but is savory) alongside an artichoke heart salad that was topped with the finest salty parmesan in the world: 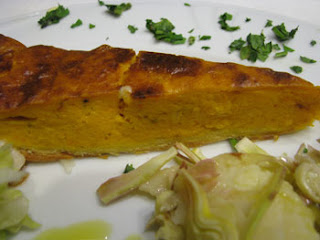 across from these two (as if they weren’t enough) were an ensalata of lettuce and radicchio (topped again with that legendary parmesan and a vinaigrette that had solid flavor but did nothing to take away from the taste of the ingredients) and an artichoke flan (sometimes called a sformatina). The flan, the flan was suave but with louder flecks of artichoke, giving it a great texture alongside the artichoke-y-ness, and it was topped with a creamy parmesan sauce that was rich against the worldlier artichoke: 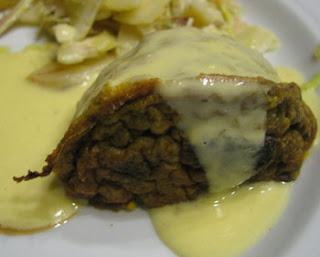 After the plate of pure happiness that some might refer to as a “starter,” we were brought not one, not two, but three pastas apiece. Each would have made it a night to talk about, gastronomically, but the three together made it legendary (and again, thanks to swell fella Gaetano for making it happen). The first in line was passatelli. Passatelli is a traditional dish from the region, and one that was different than any pasta I’d ever had. It’s made almost completely from egg and parmesan with only a minimal amount of flour and bread crumbs, accented by freshly ground black pepper. The end result is a thicker, crumbly-er pasta, one that brings buckets of cheese flavor and the snap of fresh pepper to every bite (and one we’re determined to try and make, though Gaetano warned us that while it sounds simple, it takes years to perfect): 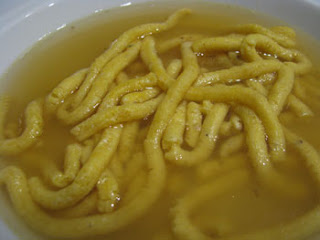 Following up the passiatelli was the reason, really (well, seeing Bologna again was up there, too) for coming back: the pumpkin ravioli. I’ve talked about it a bunch already, but let me assure you that it hasn’t gotten any worse. The pasta itself is still made and cooked to perfection, and the filling is still velvety and savory with pumpkin. This time I enjoyed it just as much as previously, but noticed another thing: the ravioli edges haven’t been smeared together to the degree where part of the pasta gets gummy. Too many raviolis have this problem, but look and you’ll see the edges are just in a state of introduction: 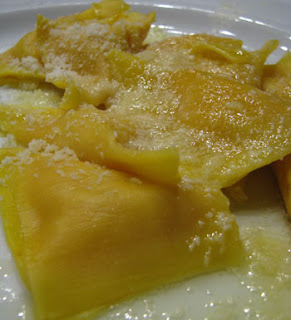 After the ravioli, you might dream that we’d be overfull, and not able to enjoy any more. Hah! Next came another scrumptious pasta: tortelloni con tartufo. I will never (I hope) be so full that I can’t fit in a serving of ricotta-stuffed tortelloni topped with fresh white truffles. The war between those who love black truffles best and those who love white truffles best is, like many of these types of food or booze wars, silly to me. My motto is “have as much of both as possible while the arguers argue in the corner.” The tortelloni were slightly chewy (the way you want them), the ricotta was rich and fresh, and the truffles were like tasting the finest earth ever imagined: 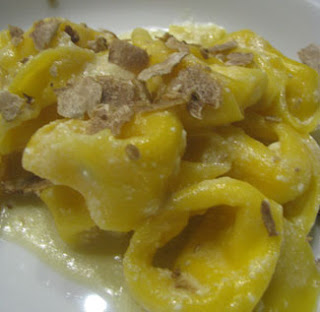 After the pasta triumvirate, there was only one thing on our minds: semi freddo. If you didn’t know (and as you might expect), semi freddo is semi frozen ice cream. Most are deliciously melty, but most servings of semi freddo don’t feature an almond speckled crust: 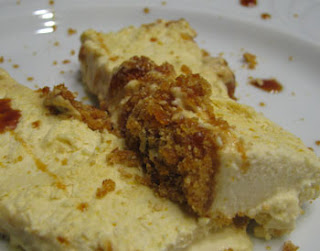 Now, I realize I’ve been rhapsodizing somewhat, but Da Cesari is worth it. I strongly encourage you, if you haven’t been there, to get on a plane, or train, or in your car, or start hitchhiking in the direction of Bologna, so you can experience it as well (and experience Bologna, too—more pictures of it soon). Be sure to send an email to Gaetano first, so he can set you up a reservation (and so you can make a new pal—always a fine thing), and be absolutely sure that you finish up your meal as we did, with a small plate of cookies and sweets and at least one glass of the mirtillo grappa mentioned above (the one with the bottle-in-ice-block that Gaetano is holding above): 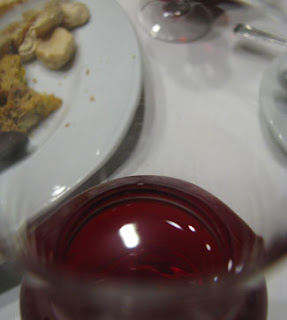