I’m not saying this happens every morning (cause we don’t need any lying here on the Six Months blog), but probably 2/3s of the mornings, or somewhere between 1/2 and 2/3s of the mornings, I go for a little walk down the Italian hill we live upon. It usually happens after taking the dogs around the grounds and feeding them (I do have my priorities straight), and every so often Nat will walk with me (or we’ll take another walk). Often, though, it’s just me walking down and up the hill. And it’s a darn nice walk down, I have to say (up is nice, too, in a visual sense, though steep, very steep), with lots of vistas and views and nature-y nature-ness. I thought it might be good for you, too, to have a walk down the hill, through a couple photos (please start moving your legs while you read now). First, when walking out the gate, I get a great olive grove on the right. We’ve seen deer in this grove at night oh, five to ten times when driving home, and once a young buck stopped in the road right in front of us before leaping into the grove: 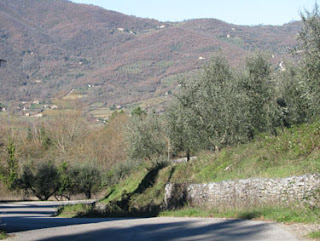 There are many lovely vistas during the walk, looking south-west off the mountain over the Niccone valley (named after the rives that runs through it) and the town of Mercatale. This onview occurs early in the walk, and also shows a newish fence. The reason I put the fence in is because I saw it built in a way. Over the course of a week, I would see an older Italian man working on it, first mapping it out, then putting up poles, then fencing, then touching it up. The first time I walked by he didn’t give me much notice, but every day became more friendly, going from Buon Giorno to Giorno to the more familiar “ciao.” I suppose even a strange American becomes familiar after a few days: 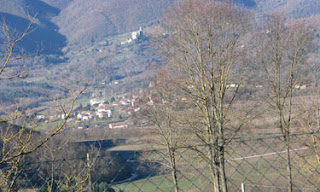 On the right when walking down, and especially farther up, near our house, you see signs for private property from Reschio. Reschio is one of the traditional castles in the area, one of the few still kept up and modernized, and still (I think) owned by tha Count. He’s also bought up lots of the surrounding land (the castle itself is a couple kilometers from us), and rents much of it and the houses on it out for lots of euros. I like that the lower sign specifically tells to stay away from his mushrooms: 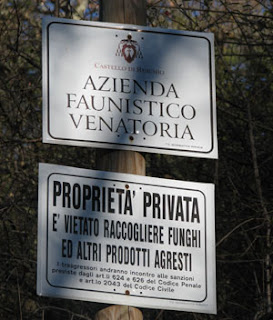 My favorite site on the walk is also somewhat castle-like, though not of the size as the Count’s. And, it isn’t in anywhere near decent shape from what I can tell, though if looking closely some construction fencing is visible. Maybe it’s being restored in a slow slow manner? I think it’s quite statuesque and elegant in its little valley, with its one crumbling tower. I suppose a couple million could get it up to shape, if you’re so inclined: 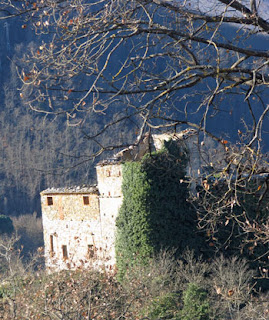 Right close to my favorite little fortress is my favorite tree. And yes, I have a favorite tree on the walk. Call me hippie if you must. The fall and winter foliage around us is stark and green, but I sway towards the stark side on favorite tree picking. This one looks so Sleepy Hollow to me, and very dramatic (even the trees in Italy have a flair for the artistic): 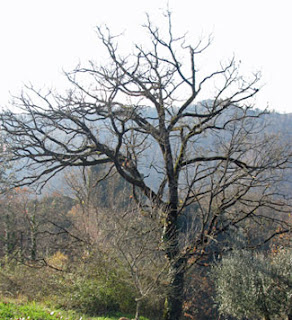 Walking down a bit farther, past some yapping dogs (one named Benji, by the way. Really) that weren’t out today due to temperatures being in the single Celsius digits, there is a man-made lake on the right (at least it looks man-made to me). Often, they’ll be ducks on the lake, and most times a small herd of sheep near it (about the same number of sheep that I owned when I was a twelve year old farm boy). Sadly, both fowl and furry animals were inside today, but the lake itself is still pretty: 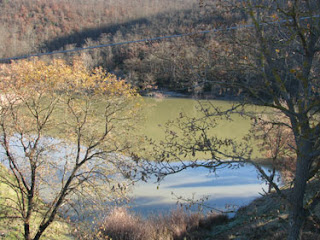 Shortly after the lake (and by “shortly” I mean the steepest part of the walk) I’m in the valley, almost to the road that connects us with the rest of Italy and the world: 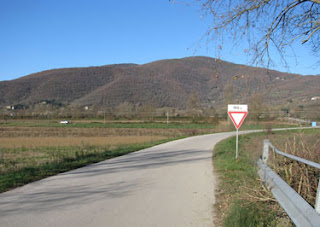 And then I turn around, catch my breath, and get ready to head back up the hill (no pictures from the way up—as mentioned: very steep): 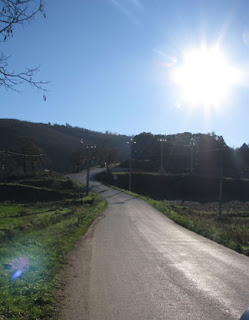