Panettone is the traditional Italian Christmas dessert cake, historically often made with raisins or nuts and with a bit of a love-it-or-hate-it reputation. Now, it’s available in a host of flavors and designs and with numerous fillings and such, and available from many different brands as well as available around the world (or there-abouts). I’d actually never picked one up in Seattle (and neither had Nat), but we figured that since we were here we should do as the Italians. If nothing else (or if it was too dry) I figured that I could soak it in liqueur and it’d be delightful (liqueur has healing powers, after all). When picking it out, I went for a snazzy model, one in a star shape, with little star candies on it and a thin band of cream and one of chocolate running through the cake. It looked reasonable lovely: 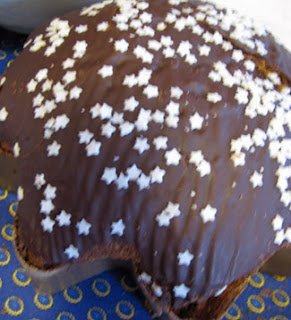 However, we made a, well, not fatal to us, but fatal to the panettone error: we left it on the edge of the kitchen table when we were away from the kitchen. Rory doesn’t usually get on the table, even when the stray kilo of cheese is left there. However, the holiday lure of the panettone was too much, which meant that only one member of the family had more than a nibble, as after Rory got to it not much was left: 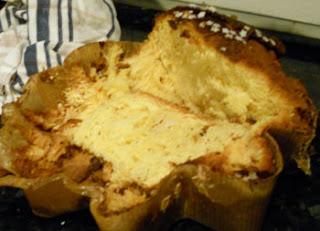 Ah well, we’ll have to try again next year. And anyway, Rory needed some holiday cheer.
Posted by A.J. at 1:10 PM