The Biggest Christmas Tree in the World

Is in Gubbio, which happens to be not far from our own Niccone Valley. And, it stays up until January, so we went to see it (on the way home from Assisi, which I’ll have more about later). To get there, especially when coming up from the south (Assisi is south of Gubbio) you have to wind around a number of winding roads, which hide it from view for a while, until BAM! there it is, a gigantic Christmas tree hovering over the lights of Gubbio. These pics don’t do it justice (I’d need a steadier hand and a better camera or lens to even come close), but you can see in the first how it seems to almost float over Gubbio (Gubbio is nearer city than town, though not huge): 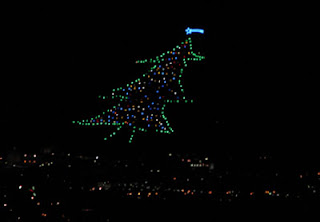 The Gubbio Christmas tree has been up since 1981, and uses 450 light bulbs and 12 kilometers of wire—pretty massive—all laid out to a height of 350 meters on the hilltop above the town. This second pic isn’t better or much different than the above, but gives a slightly closer view: 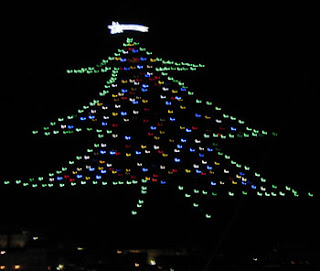 Here’s to stretching Christmas out for a few more days, too.
Posted by A.J. at 12:17 PM