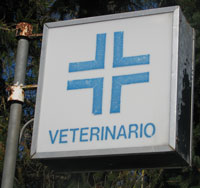 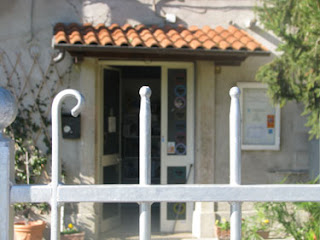 but then we saw the sign for a vet named Rebecca and the hours (the sign was falling off a bit, but looked clean): 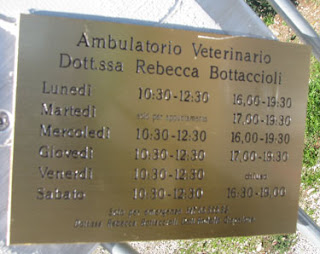 Once inside, there’s a little waiting area, so small that we left Sookie in the car cause she doesn’t like to be crowded in with cats and such (or, she likes it too much). There’s no check-in desk or receptionist or anything, just some doors off the small waiting room. We didn’t know what to do, exactly, so we peeked in one of the doors and there was a lady (turns out it was Rebecca the wet—we met the other vet, Rudolfo, or Rudy, later) in a white lab coat looking at a cat. We didn’t want to interrupt, so we sat back down and then when the cat (and the cat owner) left, we walked in. At first, we tried to explain (Rebecca the vet has okay English) that we had a dog with an anal gland problem. But she just looked at us weirdly, and so we got smart and just brought Sookie on in to the office. Once we brought Sookie in we could use the international language of pointing to show Rebecca the vet the problem. We had to pick Sookie up and put her on a big metal table, and Sookie had to get a not-very-happy checkup (which I won’t describe, cause you can probably imagine it), and does indeed have an infection, which meant we also took our first trip to the Farmacia to get antibiotics (the pharmacists here dole out doggy drugs, too, as well as acting more like doctors). We did finally (we took Rory and Sookie back together a week or so later) get doggy passports, so if we want to take the dogs to France we can: 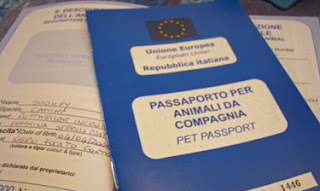 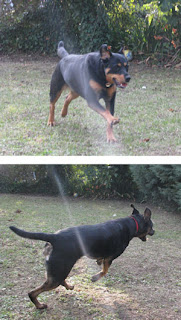