We had another beautiful Friday last week (by the way, it’s in the upper 60s and sunny here now--in case you wondered), and decided to head out for a little drive. We stopped at the local bar for a coffee and a croissant (or two--who’s counting), and then remembered that we had seen a poster recently for the Festa di Bosca, or Festival of the Forest, in a town called Montone, and that it said it started today (not today, the day I’m typing, but the Friday I’m typing about—in case you were confused). Well, we knew Montone was fairly close, outside of Umbertide (which is 10 or 15 minutes away), up a hill or two. It was mid-afternoon, so we headed there. After traveling some roads that took “curvy” to a new level, we made it to Montone. Only to find that the festa didn’t really start festa-ing until much later that evening. However, Montone itself ended up being a perfectly picturesque treasure of a town: 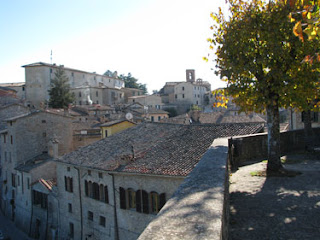 with amazing vistas from almost every angle: 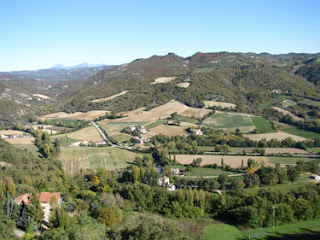 Also, the booths and stores that were going to be selling their wares at the festa all weekend had begun to set up and to open up. So, we wound our way into the main town square, popped into the nearest bar, ordered a couple bierras, and sat outside watching the people get ready and the other early birds do their shopping, under the watchful eyes of a few permanent Montone faces: 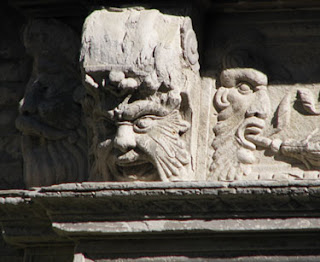 After a while we hiked through the town, checking out the booths and shops that were open (browsing through everything from free hot chocolate to craftily made little fake forest animals to homemade leather good to sausage and cheese). We wandered by one small shop (these “shops” were just set up for the weekend) that had a poster about the many healthy glories of hot peppers, some fresh nice red onions, a host of other natural remedies, and some bottles of homemade menta and genziana (or mint and gentian) infusions. I (as most reading this know) adore homemade infusions and liqueurs, so we stopped to check them out, and were going to buy some but the shopkeeper was absent. As we walked away though, he came trotting up and hollered at us to come back, with an offer of a taste of the genziana infusion. Neither Nat or I was raised to be stupid, so we went back, met the welcoming proprietor of Dragoverde, Secondo Binucci, and had a taste. Gentian/genziana is a root that has (as the legends and natural apothecaries say) many medicinal powers, and is used in Italian digestifs aplenty—it tends to add the bitterness that Italians (and Americans like me) enjoy. This infusion was just genziana, wine, sugar, and alcohol, and it had that bitter, rich, earthy taste I associate with genziana, but no so much bitter that Nat didn’t enjoy it, too. We also had fun talking some Italian, some English, and some gesturing (our usual combination of languages) with Secondo, who was super sociable: 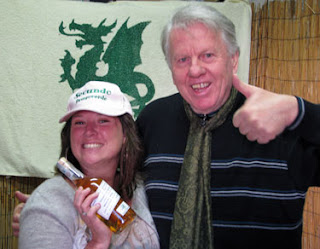 It went so well that I think Nat’s going to be in an ad campaign for the infusion (wearing this hat of course): 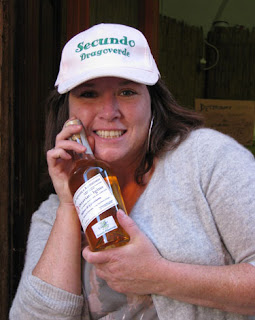 Even though we didn’t stay until the musicians started, we still were glad to spend an afternoon at the early part of the Festa di Bosco, and can’t wait to have more sips of our Infuso di Genziana.
Posted by A.J. at 9:00 AM