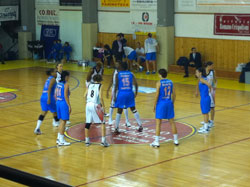 I’m not what you’d call a fanatical sports fan (I didn’t decorate my basement with a particular team’s memorabilia, for example), but I do love basketball. Enough that I get up every Sunday when the sun is shining and rally a couple other fellas about my age (well, younger—but not by much) to play hobbling hoops. I also tend to keep up with both the pro and the college game, and used to go see the Sonics in Seattle on a regular basis (until the evil folks from Oklahoma stole the team), and got to see the Storm on their championship run this year. Since being here in Italy, I’ve gotten swept up in the pre-tirement life of pasta and pizza and la dolce vita, and have lost touch and track with the sport. What’s this all getting at? That I was stoked to find out that Umbertide, the small city about 15 minutes from us, has a basketball team. They’re called Liomatic Umbertide (though I believe the organization is Pallacanestro Femminile Umbertide), and play in the ladies B league, and Nat and I went to our first game last Sunday.

First, we had to find the “arena.” Which was in a very un-assuming concrete building, with lots of graffiti on it, and looking more like a deserted pipe factory when driving past without knowing what it was. Since we thought we’d need tickets, we got there early; however, there was no ticket window, and no-one to be seen. There were signs on the door, so we knew we had the right day and right place. We spent some time walking the Tiber, then came back at 5:45 pm (the game started at 6). Now, the building was starting to rock a little more. Of course, it was still a small space (not enough time passed for another wing to be built), a bandbox gym about half the size of my high school gym in Lindsborg, KS (bleachers just on one side, no merch table, one small food stand above the bleachers). We picked up tickets at the top of the stairs (10 euro a piece), and then found a seat (no seat numbers or assigned spaces, just concrete rows we packed in to), and soon the rows were filled along the side of the court. On the court ends, one side filled with regular fans, and the other with the Fratta, the more fanatical supporters, who were wearing matching jackets and shirts and who started waving fans about 10 minutes before the game even started: 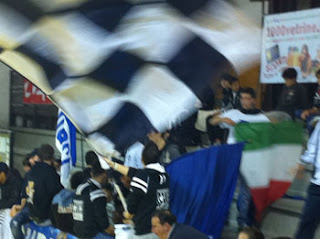 One of the ringleaders also handed out (to us, too) big green squares of paper, which were held up during introductions (green is a Liomatic color). The Liomatic team was made up mostly of Italian women, with one woman (Tiffany Stansbury, who spent time with the WNBA’s Los Angeles Sparks last season—we rooted for her anyway) from the States, one woman from Canada, and one woman from France. They were playing Job Gate Napoli, which also had a team mostly made up of Italians, with a few other nationalities sprinkled on the roster. Our team, Umbertide Liomatic, started out a little sloppy in the first half, with as many turnovers as decent shots, and with almost the complete squad seeing time, but playing with a lot of energy and with the crowd starting to get rowdier: 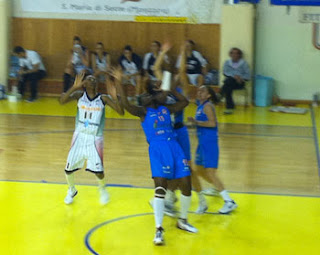 Oh, the “crowd” here is the regular crowd, and not the Fratta. The Fratta was never anything but rowdy, with a drum being banged continually, and chants, songs, rants, cheers, and yelling being orchestrated by a few and picked up by the whole group. This is something quite a bit different than in most U. S. arenas (pro, at least—it had more of a serious college crowd fan style), with this group never stopping and keeping the noise level and energy level up to eleven. Halftime came with Liomatic down, and the crowd heading out for cigarettes. The Liomatic coach (whose name I can’t seem to find) was a sparkplug, ridding himself of his suit coat by the second quarter: 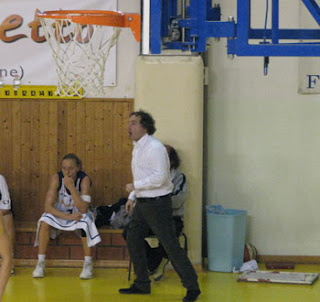 and un-tucking his shirt by the beginning of the second half—I’m guessing he untucked during his fiery halftime speech, because the team came out smoking. Better defense, better passing, and more focus (not to mention more crowd noise, along with a bit of zone defense) had Liomatic catching up quick, then getting the lead. Napoli made an honorable comeback (aided by a few un-honorable calls from the ref—blatantly  bad enough that one of the Fratta lost one drumstick when complaining. It didn’t stop the drumming), but the ladies of Liomatic held on to the lead and picked up the win: 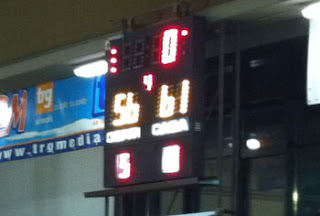 They also after the win walked to give high fives to the Fratta, and then to all around the arena—a great gesture I don’t see many pro teams doing: 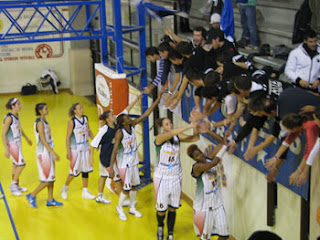 We loved being at the game, the energetic crowd, the hustling team, and the whole packed in atmosphere, and plan on attending more games as possible. Oh, we also had post-game pizza afterwards at a spot called Habenero Pizza (which was underground and tasty), where we sat two tables down from the starting center for Liomatic. Now, that’s Italian basketball.
Posted by A.J. at 6:07 AM