Pal Mark Butler asked roundabout the other day what our problem was on the Italy blogs: a lot of wine, muscular medieval walls, rolling valley vistas, and plates of pasta--but no gelato? Well, he’s right in most ways, as gelato is an essential part of the Italian experience (at least culinarily), with it’s delicious chilly nature and exploding flavors. Both Nat and I love gelato, too. While we’ve had a few gelato afternoons (afternoon seems the finest moment for gelato-ing), we’ve discovered that in winter, many places stop serving gelato, with some even shutting down. Ack. Today though, at Mark’s urging, we went on a gelato hunt (and let no-one ever say we won’t do anything for a pal, or a blog reader). We had recently been to a gas station/café/gelateria that had perhaps the most unfriendly mustachioed counterman, but good gelato, and so we headed out for it (it was also close to the Italian answer to Home Depot called Leroy Merlin, and we wanted to stop by there, too). When we pulled up--closed. After thinking it through, we figured we’d have to go to a larger town, and so went south to a city called Foligno. I’m trying to forget about it, but let me say two things: no gelato, and our first interaction with the Caribinari. Then I had an “ah-ha” moment--Assisi. Perhaps the most lovely and striking and “wow” hill town of them all, Assisi is not only the home of St. Francis, but a tourist haven. And where tourists gather, gelaterias stay open. The first three shops advertising gelato had cases full of pastries, but nothing remotely chilled. The fourth shop: voila! Gelato. Somewhere, Mark smiled in his sleep (I think it was 4 pm here, so 7 am in Seattle, so it may have been a smile on his dog walk). I went for an intriguing combo of pistachio (perhaps the tops in gelato for me) and frutta di bosco (or fruit of the forest--a berry combo). Not the freshest or the best gelato ever, but you know what? It was darn tasty even with the temperature having dropped to single digits outside (single Celsius digits, that is): 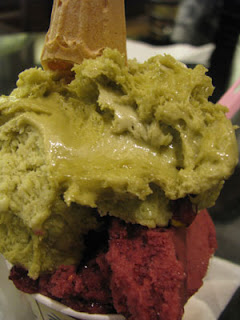 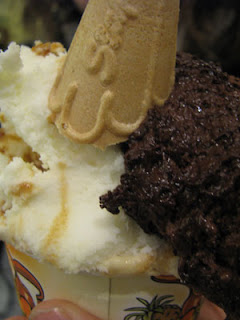 These may look like large servings, but let me assure you, we were happy for every bite and left no gelato uneaten: 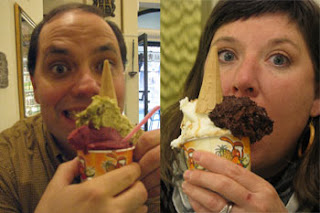 Mark, thanks for kicking us into gelato gear. And here’s to spring and the opening of more gelato shops arriving quickly.
Posted by A.J. at 7:36 AM