Sun and Clouds and Fog Over Lake Trasimeno

We haven’t mentioned it much (outside of ferrying across it with Keith and Tasha), but we live fairly close (about 20 minutes here or there) to the largest lake in central Italy, Lago Trasimeno. Not only a lovely lake, it’s also the site of a famous battle between Hannibal and the Romans, where Hannibal mopped up the floor (or the lake) with the Romans due to some fancy strategizing and a serious ambush. It also has lots of nice towns around and near it, and yesterday we were heading out to visit two of them (Panicale and Castiglione del Lago both of which I’ll write about later). On our drive, we had to pull over though, because the views of the lake and the islands on it as we wound around the mountain drive were amazing (these two pics in no way do it justice, but at least you’ll get an idea of our lake and the skies and the vistas. Oh, one pic’s just of the lake, and one’s a closer up shot of Isola Maggiore): 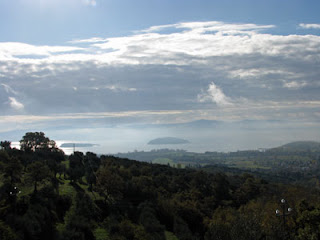 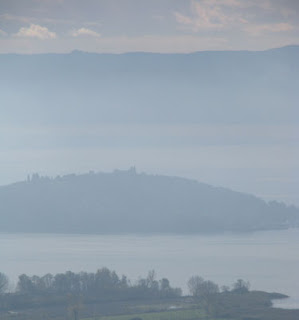