There are a number of attractive small-to-smaller towns or hamlets in our valley (the Niccone valley, along the border between Umbria and Tuscany), including Liscone Niccone, which is the closest, Mercatale, which sits right up close to Liscone and which has a delicious bakery. The others we drive through on the way to Umbertide (which is larger, and where we go to internet, hit the market, and more), with the final one before the turn to Umbertide being Niccone itself. Driving through it, we always pass a cute little ristorante called Locanda di Nonna Gelsa. It looks so welcoming (as you’d expect a restaurant called the inn of grandmother Gelsa to look) that when we decided to go out the other night, it was an easy pick. It turned out to be a tasty pick, too, with only one mis-step.

We started with an antipasto vegetariana, and it was a delectable knock out. The grilled zucchini (seasoned with a slight spiciness) and eggplant melted in the mouth, the yellow and red peppers had a hint of crunch, and the mozzarella balls balanced the spice and grill taste. But the real stars were the more unexpected members of the plate: a thicker slice of grilled eggplant topped with a chunky tomato topping that mingled those two garden friends perfectly, a zucchini and spiced garlic breadcrumb casserole (well, that’s not it exactly, as it wasn’t mixed thoroughly, but that’s close), and an amazing sformatina funghi. I can’t wait to order this again, even when the picture doesn’t do it justice (I was still getting used to the intimate lighting): 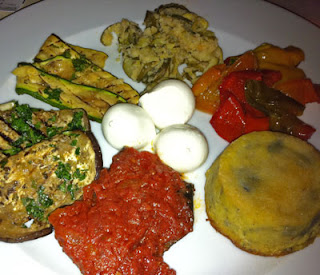 Both Nat and I also went for the soup (after our friendly waitress sold us on it), which was a barley vegetable. It was more creamy than brothy, as the barley had been slow cooked with the veggies, almost as if it was a bulkier risotto (which in a way, it was). It had been raining all day, and soup in a warm cozy spot drives the rain completely out the door and far away. Again, I’d love to have this soup again: 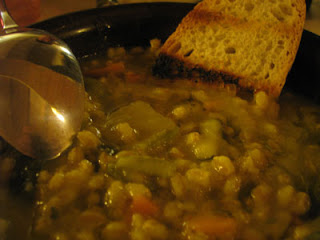 For pasta, I had the tortellacci con zucchini, zafferona e merdorle (or a big tortellini stuffed with ricotta and topped with zucchini, saffron, and almonds) , which was impossible to resist (all those interesting ingredients). And while it didn’t rise to the heights of the previous courses, it was darn tasty. The almonds gave it a tiny crunch that added texture and the spinach pasta had great mouth feel with the ricotta filling: 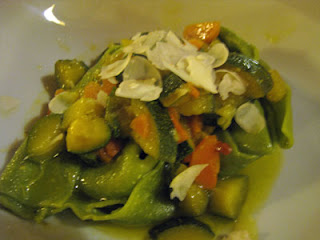 The only problem in the evening was with Natalie’s pasta course. She had a craving for a good pomodoro (or tomato) sauce, and so ordered the ravioli pomodoro e’ basilica . The pasta itself was solid, but the sauce had an extra helping of nutmeg added to it. I think the idea was to make it exotic, but it didn’t work for her (I didn’t dislike it as much, thinking it more odd than anything else): 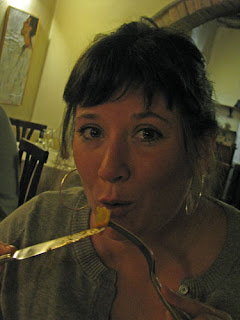 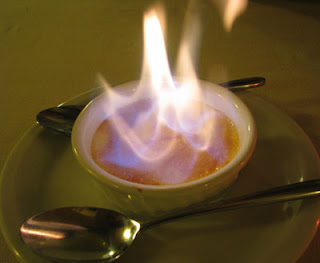 I believe we’ll be back to visit grandma Gelsa—but skipping the pomodoro next time (and maybe just ordering two antipasto vegetarianas). Oh, and for any meat eaters reading—the couple next to us shared a steak that came on a special raised tray and that was, really, bigger than my thigh. Insane.

*See all Italian restaurants
Posted by A.J. at 6:02 AM