Lunch at Capponi in Umbertide

Umbertide is the closest small city of note, about 15 to 20 minutes away, depending on how fast we take the curves, and where we’ve spent a lot of time as we settle into our new home. We’ve visited all three supermarkets (now that we live here, as opposed to just being tourists, we have to find where the bargains are instead of just la-di-da-ing our way through) in Umbertide, been to the Wednesday market (which I’m sure will be posted about at some point), and spent lots of time searching for free wifi we can tap into without looking too suspicious. We’ve also visited Bar Pina a number of times, which is on the Umbertidean outskirts, and I’m sure will visit it much more. Yesterday though, we left the house on a mission to go to this garden/pet store on the outskirts on a village called Verna, which is itself on the outskirts of a town called Trestina, which to get to we turn left at Niccone, instead of the right we’d take to go into Umbertide. Anywho, we’d driven by said store a couple times, and Nat always wanted to stop but it had been closed every time so far (mostly cause we keep forgetting about the three or four hour Italian break after lunch, when most stores are closed). The store currently has big containers of pumpkins outside, and with Halloween close we wanted to stock up. After picking up our pumpkins, and some garden gloves for Nat, and some treats for the pups, we were driving back, and decided to head toward straight to Umbertide instead of going home. Our route had us traveling past Bar Pina, where we saw Andrew (our friendly British landlord, if you didn’t get that in an earlier post). It would have been un-friendly to drive on by, so we stopped and had a bierra with him (and Marianne, who soon showed up), and then went into town to have lunch. Before leaving Pina though, Andrew and Marianne pointed us in the direction of a ristorante called Capponi for lunch (they hadn’t been in a bit, but said it used to be reliable), and we took their advice. Capponi was in a square off the main square in Umbertide, and has a handy parking lot (it’s also a hotel). It was pretty tasty, but the coolest thing was that they had a dumb waiter that brought the food up from the basement kitchen. The waitress would send the order down, and then, using a series of lights (which we never quite figured out—it was like different colored lights combined with some Morse code functions perhaps), the cooks would let her know when food was ready and she’d hit a button and up food would come. Here it is closed: 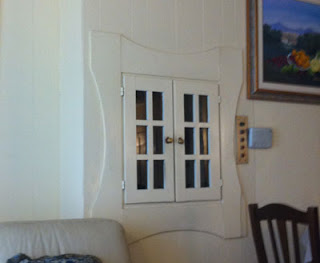 and here it is opened: 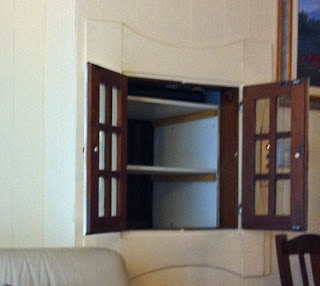 Genius. It reminded me of being in a restaurant that wanted to be thought of as posh 75 years ago (or, I suppose, made me imagine what it would have been like, cause I wasn’t around that long ago). In the states, the dumb waiter from the past probably would have been disabled long ago, but here, it’s still being used, and the cooks are still in the basement. Oh, if you wondered, the food was by and large tasty. We skipped the provided tourist menus (which enforces you to have a “secondi” or meat course, which we can’t take advantage of unless we bring the dogs along, or doggy bags), but had pastas and sides. I had a ravioli with asparagus and truffle. The ravioli was homemade, and the pasta itself was nicely done, with a slight chew. The filling was also nice, a puréed asparagus and mushroom mix that was texture-y and with good subtle flavor. The only downside was the “fresh” truffles shaved on top. Don’t get me wrong, I adore fresh truffle to exhaustion, but these shavings had no flavor, and were the texture of tree bark. Not so fresh--mostly added to add a euro to the price it seemed. But still a worthy dish: 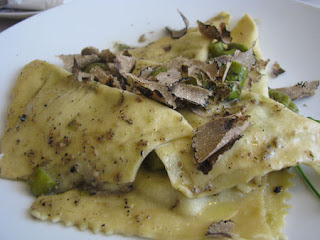 Nat had tagliatelle with porcinis and her pasta was also homemade and delicious. And the big chunks of porcini were scrumptious, meaty (hah!) and juicy (side note: Nat had had a cold the day before, and says I need to say that when posting the below photo--though I think she looks cute): 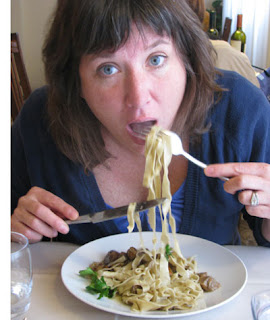 I had some potato arrosto (or roasted potatoes) for my side, and they were done just right: steaming and soft on the inside and crisp on the outside. But they were outshined by Nat’s side dish, which was a carrot sformato--a carrot pudding more or less. Sformato (and its variants) is a molded (but not moldy--ba’dump’bump) dish, usually of cooked veggies mixed with egg or cream and cooked in a water bath. We (in this case, me and chef Jeremy Holt, that is) have a great recipe for a spinach-based one in Double Take (go on, go get yourself a copy). This carrot version Nat had was fantastic, slightly creamy and yet not runny at all, very formed, with cooked and possibly pureed carrots mixed with egg and spices: 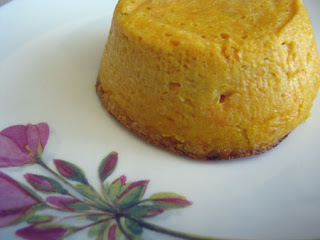 Then, cause it was Saturday at the time, we shared a big icy lemon/chocolate gelato combo. And that, friends, was lunch: 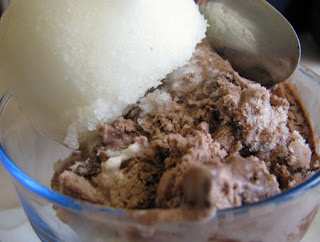