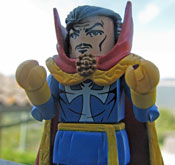 Okay, I alluded to this earlier, but I have a large dollop of the comic book geek residing deep within me.  Not that I swallowed a comic book geek, but that I am one, partially, though I stepped away from the rack for many years. When I was a kid, my pops used to take me to McPherson Kansas’ Dunkin Doughnuts almost every Saturday, where we’d get doughnuts and then he’d give me a quarter, or thirty-five cents (whatever a comic cost at the time), and I’d go pick out an Incredible Hulk, Defenders, Dr. Strange, or others from the comic shop next door while he drank his coffee. This started a comic book buying regularity that lasted all the way up to graduate school in Kalamazoo, MI--where the comic shop stunk (and not just with the smell of unwashed nerds) and where I stopped buying comics. Until I started working with pal Philip at Amazon. Philip (check out his blog about his cute-as-a-button daughter Yuki, too) has his fair share of comics and buys more every week, and he’s awesome besides, and he goes to Seattle Comic Cons, and convinced me to go. I figured if someone as rad as he is bought comics, maybe I should pick up some more, and this has kept me going to “cons” with him and buying old comics that came out when I was a kid, as well as buying collections of old comics, and (here is where the real geekiness shines) reading one or two comic blogs.

Really, there was one comic blog in particular, Neilalien, that helped spur on my comic geek resurgence in addition to Philip. Enigmatically named, Neilalien himself writes with just the right amount of comic-geekiness, general intelligence, jolliness, and punk-rockiness for my taste. He’s also a Dr. Strange expert/fanatic, and since I dug the Dr. when young, his was the ideal blog to get me reading comics again, especially Dr. Strange  (the original run of Stan Lee and Steve Ditko Dr. Strange stories way back when in, in my mind, is one of the pinnacles of comic graphic storytelling: personalized, stylized, and atmospherically charged art with a story that rings heroic to me). My comic buying since becoming re-addicted hasn’t been too out of hand (except that time I bought about 2000 at a charity auction. But hey, it was for charity). It has been voluminous enough that Nat has noticed though--which turned out not to be a bad thing, cause it led her to buy me a set of Defenders (the Defenders being the world’s finest “non-team” consisting of Dr. Strange, the Hulk, the Sub-Marnier, and the Valkyrie, among others here and there) “mini-mates.” These are little action figures and awfully adorable.

Where is this leading? Well, when packing to come to Italy, I slipped the set of little figures into a suitcase, not sure if I was doing it to bring some Seattle color along or to remind myself of my comic collection at home, but along they came. Then, the other day, I was arranging them on the dresser and decided to take some pics with the Dr. Strange figurine. Not sure where the urge came from--probably I thought it’d look cool-y silly, which is something photos need more of--but the first few pics I really dug, and so now I’ve decided to do a series. I both think they look neat, and have noticed that by putting the Dr. in a pic next to a larger object, it makes me consider the other object more closely instead of just passing them by, as well as reminding me that each object has at least a smidge of magic contained within it. This is both with everyday things, like the brick well passed on my morning walk, and with more fleeting objects, like a bowl of pasta. What I don’t plan on doing is getting all essay’d up with each picture. I’ll just put up the picture and a title (under the D.S.D.I. header—that being “Dr. Strange Does Italy”), and then let them stand alone. For the first one, here’s the good Dr. with an Italian staple, the tomato: 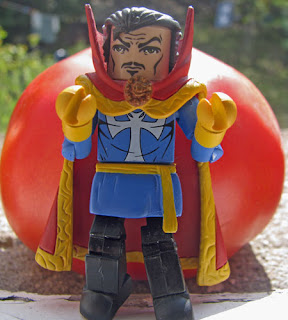