We hit Nestor’s Pizzeria and Bierreria last night (I know, I know, only two times in our first three weeks here—somewhat hard to imagine), and had some absolutely delicious pizzas. If you missed the first installment of Nestor’s Pizzeria Fridays, then go there now to learn a bit more about Nestor’s. If you don’t feel like clicking (cause you’re getting too hungry and don’t want to waste time), let just say that Nestor’s is the best pizza in the world, and one of the friendliest spots in Umbria for a meal. Last night, I had a new pizza for me, Patate e Bianca. Which means potato and white (as you could have, or did, guess), and which was a non-red-sauce pizza. It had big chunks of crisp potatoes, a couple pinches of fresh rosemary, and some freshly grated parmesan (as well as mozzarella underneath it all), with the reliably perfectly crisp Nestor’s crust: 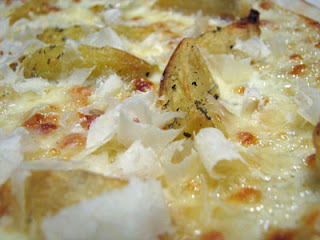 Nat had one of our all-time favorite Nestor’s pies (and though I loved mine, I was awfully glad that she wanted to share), the Ruboscuore (by the way, I’m not 100% sure I’m spelling that right. Or even 50% sure. I need to write it down on our next trip). It’s a red sauce pizza, with giant chunks of wild mushrooms, béchamel sauce, mozz cheese, and walnuts. The mushroom taste on this pizza is so amazing and juicy: 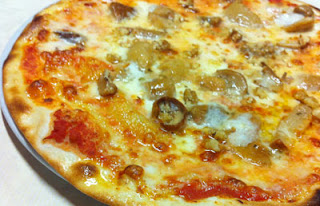 Here’s to another night of the world’s best pizza (and, since we saved a bit, here’s to a lunch the next day of a slice of Nestor’s pizza topped with an egg—another favorite treat).