We were in Assisi again (not the pejorative “again” though, which would make it sound like going to Assisi is a chore, which it definitely is not, as it’s not only chunk-a-luck with art and artistic churches but a lovely little hill town in its own right, if a bit overly touristed and pilgrimaged here and there and then, all of which is to say it’s never a chore to visit) and thinking of lunch. It was Nat and I and pals Jon and Nicole and Christy (and yeah, I’ve blogged about them some, and am still blogging about them, though they’ve been gone for over a week, but blogging about them almost makes it seem like are still here, just outside the door about to walk in, which would be sweet), and our first thought was Il Frantoio, but once more they were out on vacation (which is nutty—that’s like months of vacation. More power to ‘em, but we probably won’t try them in the future, cause its down numerous stairs, and what if they’re on a permanent vacation). After walking up and down the streets of Assisi, we wandered into the very friendly and well-named Al Camino Vecchio (the name’s so close to “Camaro” that it called to the 70s-KS-boy in me). Now, it was a bustling, family run spot, packed with a host of folks from different nations, and we were a party of five talking it up as if we were getting paid by the spoken word (which is how it is with old friends that don’t see each other enough), and what is leading up to? Poorly taken photos. Which is a salivating shame, cause the food was delish. We started with a round of wine (notice the two carafes in the above photo—one red, one white) and a round of salads, then I moved on to an intriguing gnocchi variant (I believe it was called “gnocchite” or some such—again, too much talking and laughing to have time for writing things down). It was actually a gnocchi ravioli: 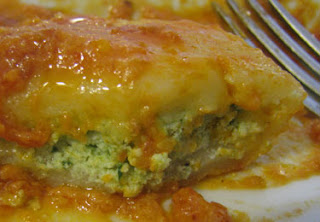 it had gnocchi dough around a spinach ricotta filling, topped with a zippy tomato sauce, with an end result that was different and scrumptious. The gnocchi dough is so different, more pillowy and pliant than pasta dough. I dug it indeed. Nat went for the straight gnocci, topped with cheese and truffle and cream and it was also quite good, gooey and flavorful (so much so it threw off my aim I suppose): 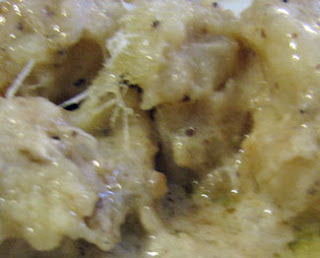 The other dish that was a super standout was Nicole’s pisi (I believe—it was a pasta I hadn’t seen the name of before) with ceci, or pasta with chickpeas in a light tomato sauce. The pasta was done just right, and played well with the also al dente chickpeas (their bright flavor against the more tangy tomato sauce would have made St. Francis himself dance around and do the happy robot). Of course, again, my aim was off in the photos: 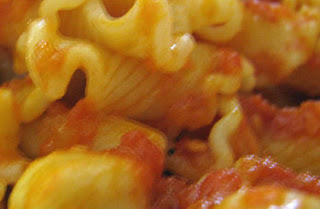 Even though it’s a hike up a high-arching street, Al Camino Vecchio is work the workout—and remember, the walking means you can have another course.

*See all Italian restaurants
Posted by A.J. at 9:40 AM