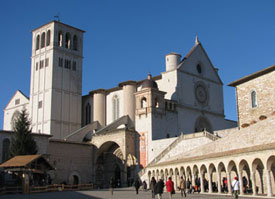 Assisi is a quaint little Umbrian hill town. Well, maybe not so much, as it’s really an internationally known spot, revered by pilgrims, art and architecture lovers, and history mavens. If you don’t know (and I suppose you do, but let me refresh just in case), Assisi is the home of St. Francis, who is the reason for the above-mentioned international magnetism. St. Francis not only started a monastic order, completely changed the church, had a devoted female opposite number (Clare) who also started an order (nuns, naturally), but made friends with animals. I’ve tried to think of how to make a modern parallel to St. Francis, but it’s impossible. It’d be as if Paris Hilton gave up her worldly possessions in front of her parents and the country’s most famous governor, devoted herself to charity, chastity, poverty, and obedience, changed the way the US government operates and thinks (the church was at least this impressive and important at the time), and inspired a horde of followers to devote themselves to the same ideals, including one of her rich boyfriends. After she died, her selflessness would then inspire others to build an otherworldly-lovely monument, decorated on the inside by the top artists of the day. Unimaginable. But that’s what St. Francis was like, in hindsight. And Assisi is a reflection of this, if one that’s a bit touristy and more ornate than he would have ever approved of, I suppose. But beautiful, indeed. Not every building and brick is focused on St. Francis and Clare, though. The first church I always see when entering Assisi proper (because I always park in the same cark park—hey, I’m easy) is actually the Cathedral of San Rufino, named for a 3rd century illustrious bishop. Like most churches, no pics are allowed inside, so I can’t show you the baptismal font where Clare and Francis were baptized, but I can show you the front façade of the church, which dates back to the 12th century and is starkly handsome: 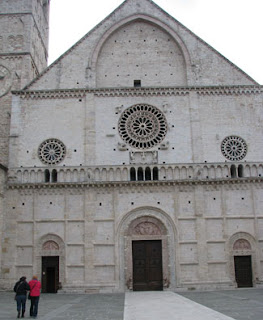 From there, it’s a short windy walk to St. Clare’s. Not as ornate as St. Francis’ big basilica, Clare’s church is still a charming, and more relaxed in its visual wonders, spot: 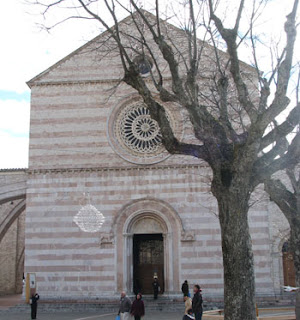 one that also presents, when sitting on or looking over the wall, delightful views of the Umbrian countryside (a fitting spot for Clare to be buried beside): 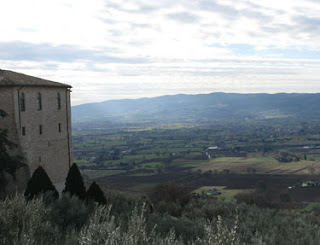 It’s helpful when strolling the streets and cozy brick and stone corridors to take a side path here and there away from the shops and shoppes with their products from China (okay, there are some that are truly Italian, especially one or two full of hand-carved olive-wood products) to get a grasp of how Assisi must have been a delight to wander (not that it isn’t now, but to wander it when bereft of crowds would have been something else entirely—which is why getting away from crowds here and there is good): 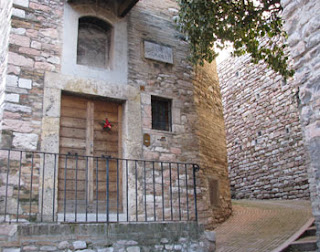 In the middle of Assisi is the Piazzo del Comune, where the Temple of Minerva (now called the church of Santa Maria sopra Minerva) holds court. A step back from the Renaissance into the Roman age, the columnar front of the church is perhaps the best example of Roman columns outside of Rome: 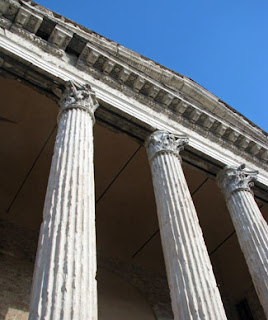 The church inside has been completely re-done in a baroque style that’s worth viewing with its garish charms. However, it’s nothing like the main Assisi event, the take-your-breath-away Basilica of St. Francis: 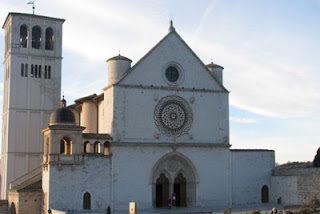 Honestly, there’s something about Assisi and the Basilica that amazes me more than heroically artistic cities I love such as Florence. Not that I think it’s more worthy, or has better art, etc. It’s just that I would expect a historically powerful and financially important city such as Florence to overwhelm. But Assisi is different--it’s done up because of one man (and his followers, but inspired by him). The Basilica is a reflection of the devotion he inspired. Again, no indoor pics, but it’s like two galleries on top of one another, with the top an airier, lighter, monument to his life and to the art of Giotto (thanks to Giotto’s series of frescos about St. Francis’ life, frescos which run along the sides), and with the bottom church a darker, but not dreary, array of allegorical, historical, and splendid artworks by a number of the top hot artists of the time. It was a cold day when we were there recently, but clear, and blue-skied, providing the opportunity for some bundled up, but still amazing, viewing of this town’s signature artistry, not to mention the town itself, perched on the foothills of Mt. Subasio: 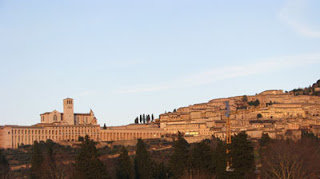