While learning about Urbino, art, and possible career changes (as detailed below), we didn’t get so enthralled as to forget lunch (as if anyone reading this would ever imagine that we’d skip lunch). We followed a few signs, strolled down a few small lanes, and found a spot called La Balestra, or the Crossbow. It was a local-y, smallish, spot, with lots of medieval weaponry on the walls (following up its name). The kind of place my nephews would dig I think (and hey, while talking about them, let’s take a second here and now to say Happy Birthday to my nephew Kaiser, who’s 15 today). What really drove us in, though, after we read about it on the menu posted outside, and what I ended up having (after an ensalata mista that was quite good, but you’ve seen those before), was a Ravioli Valerio, or a cheese and juniper berry ravioli: 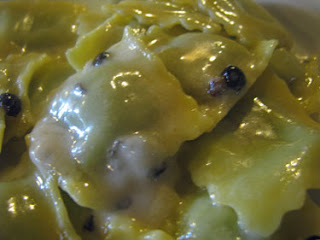 The ravioli itself was a worthy dish, with well-cooked pasta and a cheesy filling, but the juniper berries dotting the ravioli really made it stand out from the ravioli pack, with a bright juniper burst and chew every time you hit one.  Nat was see-sawing between a tagliatelle with tomatoes and beans and gnocchi with porcini and fossa cheese (or parmesan aged in a cave). After much soul-searching, she went for the latter (and after tasting it, I think she made the right choice, cause the porcini were bursting with taste and the cheese had a salty goodness that balanced them out): 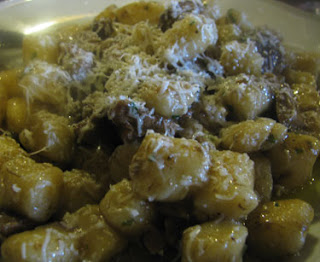 Sadly, they were out of the Contorni we originally picked (a dish of fried veggies), so we decided to have a little post-pasta cheese and honey plate. The cheese was goat-y, and farm-y, which sounds probably more out-in-the-barn than one might want (unless one was a goat), but when balanced by the sweet honey it made for a fine finish to the meal: 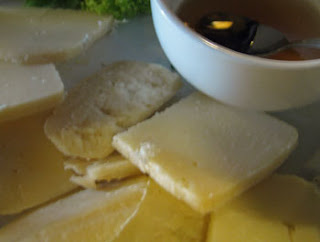