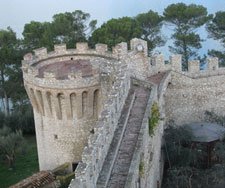 After spending the morning a few days back at Panicale, we needed to catch some lunch (as the eating spots were closed in Panicale due to the November restaurateur exodus) and wanted to catch some more sites as it was fairly sunny and our sightseeing glass hadn’t been filled. We didn’t want to head too far (hey, it was lunchtime), though, which led us to Castiglione del Lago, about 15 minutes from Panicale and a little closer to the lake (Trasimeno). Castiglione del Lago is a bit bigger than Panicale, with a well-developed reputation for being  a beach town, leading to it having somewhat of a sprawl to handle the summer influx (it has quite a beach). Some kind of settlement has been in this spot at least since Etruscan times, and at one point fought a lot with Perugia (like most towns in the area), and the older part of the town is anchored by, and focused on, a large rocca.

First, before exploring and expanding our medieval fantasies, we had to alleviate our stomach’s growling. We scouted the local ristorantes, narrowing down our choice to a spot called La Cantina. It was hooked into a hotel, and had a big outdoor eating area that was closed off—neither usually good signs. They were out-weighed however by the hanging sign, which had a jaunty Dodge-City-ness I appreciated, and by a decent amount of veggie options on the menu in the window. Once inside, we knew it was a good choice because La Cantina had a welcoming atmosphere and staff, rustic brick walls and brick arched ceilings, a big open brick fireplace that we got to sit beside, and (best of all) the door to the bathroom was cut out of a giant wine cask: 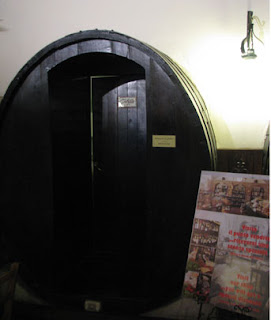 Enough décor—let’s get to important stuff: the menu. There were enough veggie choices that we both went for antipasta and primi. Nat started with frittata with red onions from Cannara (which is famous for its onions), and while the picture doesn’t look like it contains famous onions, trust me, it did: 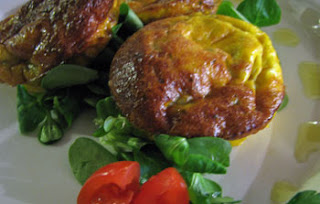 I started with a patate sformatina with Scamorza cheese, or (basically) a cheesy mashed potato soufflé, served with a mushroom sauce. It was delish, smooth but with a little edge and with bursting potato and cheese flavor accented by the creamy mushroom sauce: 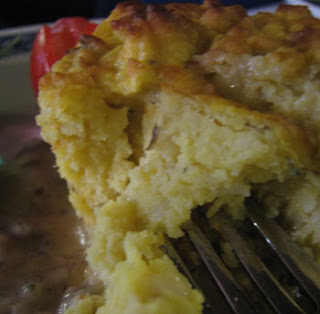 From there I went for a black truffle polenta. It came in a pretty brown baking dish, was toasty hot, and looked somewhat like it was topped with a spider web. The spider web was made of truffles and gorgonzola cheese though, and was a flavor explosion of earthy truffles and the beautiful bite of the cheese: 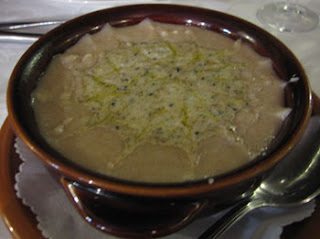 Nat also had a delightful main, though quite a bit different, a risotto with cheese of the fossa (or “hole”--think melty and also aged) and hazelnuts. The risotto itself was al dente-rific, with the cheese creaming and the hazelnuts providing a crunch and woodiness. Outstanding: 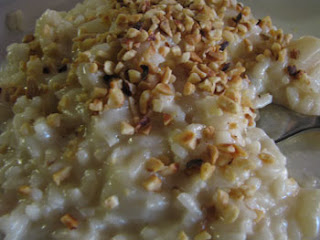 We also had some chocolate-y madness for dessert, but I figure I’ve caused enough salivating, so let’s move on. The town (the old town centro at least) is longish and not too wide, but with a nice honestly old feel to it. We walked around town a bit, stopped into the Church of the Maddalena, saw some art, and then headed to the main event, the castle. To get into the castle, we first stopped at the Ducal Palace: 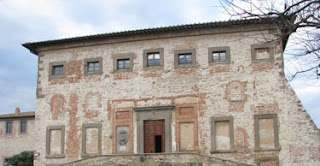 The Ducal palace belonged to the della Cogna family, a family that was the tops in this part of Italy for quite a while. The Marchesi della Cogna lived in this very palace, and it’s decorated with a series of frescos on the ceilings in the rooms. There are two series of frescos, one celebrating the military might of Ascanio and another (perhaps more interesting) one that’s mostly mythological scenes and characters from Roman mythos, with the frescos making up instructional stories and pictures. I suppose they didn’t have videos. The focus is on growing up to be a strong leader--and on avoiding the mistakes that the Roman gods and goddesses and their pantheon seemed to fall into regularly. The palace was cool (in a “wow, people lived here” way), but even better was the castle. To get to it, you have to go from the palace through a long tunnel: 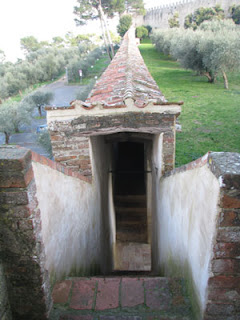 You end up on one tower, which you walk up to reach the walls of Rocca del Leone (or the fortress of the lion), which was built in 1247 when the city was conquered by the unfortunately named Frederick the II of Swabia. You can walk all around the walls (just remember not to lean out too far--it’s high) and up in the towers, circling a large center area as you walk (in the summer they have concerts there—which would be amazing): 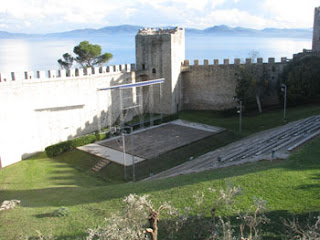 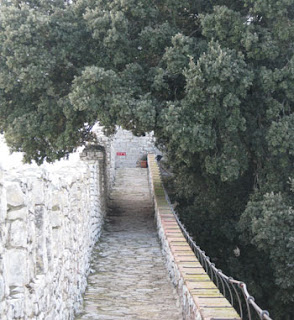 It’s worth the walking though. Partially because the structure itself is solid, and solidly amazing. It’s rare to be in a space like this and be able to stroll complete circuit of the walls, picturing yourself with a crossbow watching the surroundings for approaching armies (or traveling wine sellers). I’m hoping that those folks tasked with watching for approaching war wagons didn’t get as distracted by the views—but I sure did. The castle walls are tall enough that the views over the lake and over the surrounding fields are almost otherworldly: 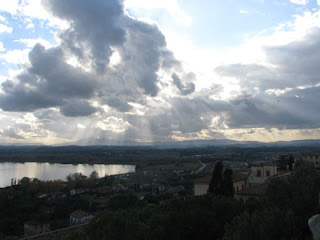 On the tallest tower, there are also perfect views over the city of Castiglione del Lago, a city that’s well worth spending an afternoon residing within: 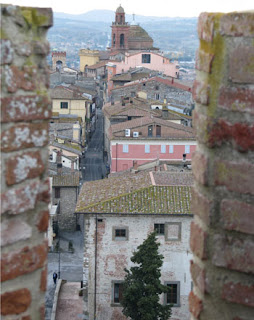 *See all Italian restaurants
Posted by A.J. at 6:44 AM