We had our first visitors at Cielo Chiaro recently (about a week back—hey, I would have posted sooner, but was spending time looking for internet connections) and had oodles of fun with them traveling around. To tell the story of their three days here, I’m going to go picture heavy (you’ve been warned), but thought that would be more fun that text heavy (which I have a tendency to do, as you know if you’ve seen this blog before). This one post covers almost everything, except our last dinner with Keith and Tasha. Who, I realize, I need to introduce (you already know me, and should know Natalie, too—if not, read her blog Bella Cinghiale and catch up). First off, both Keith and Tasha live in Seattle, in the Ballard neighborhood, about 6 blocks from our house. Keith is sometimes called cookie, and likes his Spritz’ (like all four of us): 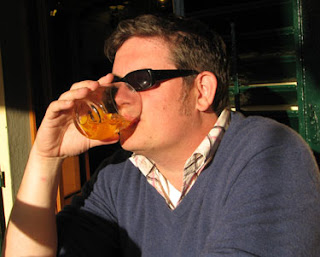 Tasha, short for Natasha (which I think she only uses during missions of international espionage) knows how to wear big sunglasses and look very Monte Carlo: 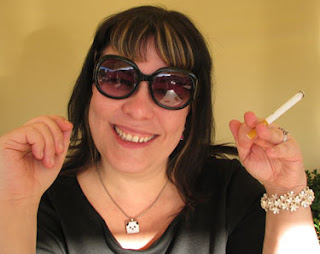 We picked them up in Camucia, at the little Camucia train station, had a quick lunch which was good (as 95% of all meals in Italy are), but then headed out to Tuoro. Tuoro is a decently-sized city that sits right on Lago Trasimeno, the lake and city being about 20 minutes from our house, via some very curvy mountain roads. We skipped Tuoro proper, and went straight to the lake, where (after some mathematical calculations from Keith to figure out the scheduling, and after some bierra for Nat and Tash at the dock bar) we found the ferry dock: 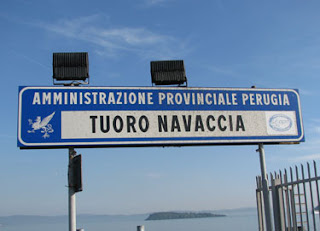 ﻿
and then got on the ferry: 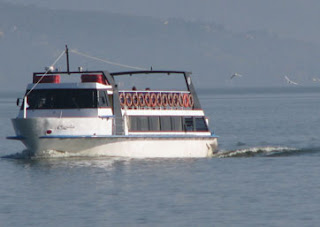 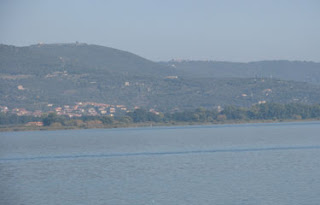 It has a little town, some old and lovely churches, and this welcomingly psychedelic sign: 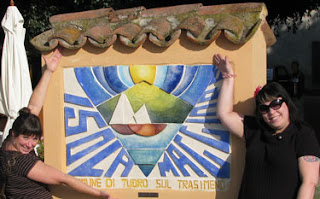 Often, you can walk completely around the island, and/or over its mountainous middle, but currently half of the walk around was unavailable (we figure for some sort of Wicker Man Wiccan ceremony). We did the half island walk, which was pretty and picturesque, and which took us by a statue or two of St. Francis: 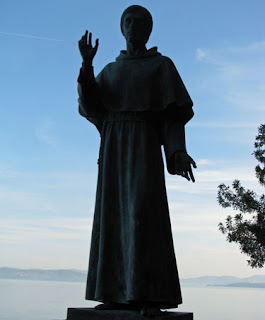 It turns out Mr. St. Francis stopped on Isola Maggiore for a spell (like make visitable locations in the area), and communed with a rabbit, as well as more routinely divine beings. Because of this, there are lots of rabbits on the island, and pheasants, and one fat fox (the last my own guess). There’s a really lovely church atop the island that we walked up to, which had a cemetery behind it that you couldn’t go in to—you could, however, look into it and see you reflection in the glass across it: 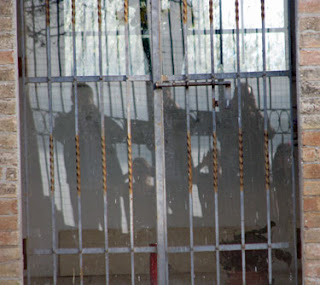 After leaving the Isola via ferry, driving back to our neighborhood, we kicked it at the house, played with the dogs, Spritz’d up, and then headed to Taverna de San Leo Bastia for dinner. You can read heaps more about this sweet little Taverna and the town of San Leo Bastia on my other blog (where I have a post about our last vacation in the area, when we stayed in San Leo B). It’s about 30 minutes or so from us, and the main reason we went was for the fancy meat plate: 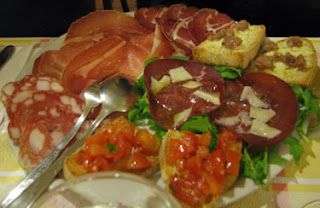 though Nat and I don’t eat meat, we can appreciated the care they take at the Taverna when putting together the above pretty plate o’ meat, and we knew Keith and Tasha would eat it up happily, while admiring it as a vision of meat products. The next day we hung around the house for a bit, so Keith could continue his studies into being an Italian grandmother. This day he learned how to hang clothes: 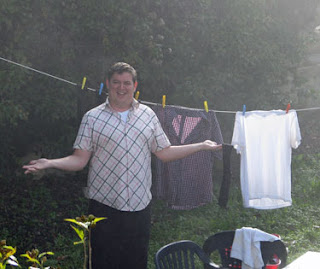 Then we bundled into the car to head to Greve, which really gave us grief. I have to vent here for just a sec. See, we found this cute little flyer in the house that someone had left about this place called La Cantina de Greve, which promised much in the wine tasting, meat tasting, general good times, and a pleasing atmosphere that harkens back to the 1800s. After a drive that was longer than expected (our car GPS was angry at us), we ended up in a little town that was once probably extremely cute, but we know has become a little bit of tourist hell. And La Cantina? You buy a prepaid card, and then go around to these wine kiosks, where you put your card in, pick a specific wine, and then it spits out a sip into a cup. The staff—never even talks to you except to take your money. The meat and cheese tasting? Again, put your card in a slot, then these trays (which looked as if the food inside had been there a long time) open up, where you can take a little taste. The wine itself? Underwhelming—the fact that most bottles had been sitting in a big metal kiosk with a plastic tube in them probably didn’t help. Listen, I know little Tuscan tourist towns need to make money, but this one had definitely gone around the tourist bend. Also, I’m of the firm belief that drinking, even wine tasting, even if you’re a judge in some prestigious wine tasting event, should be done with enjoyment in mind. This place was anti-enjoyment. Ugh. Let’s move on. Oh, the one thing that was good in Greve was the fact that Tasha and Keith picked up some Cinghiale prosciutto that may have changed their lives: 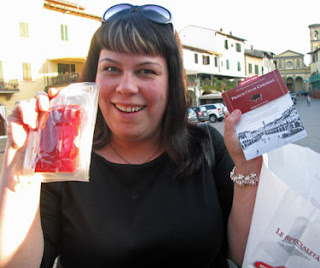 On the drive back, we decided to skip trying to hunt down some ristorante that was new, and took Keith and Tasha to our local eatery, Bar Fizz. It really deserves its own post, but let me say that it’s a tasty, friendly spot, owned by the chef and world’s fastest pizza cook, Giuliano. We all had Prosecco, some salads, and some tasty pasta (Tash had tasty pizza), highlighted by my ravioli (stuffed with spinach and ricotta, and topped with sage and butter): 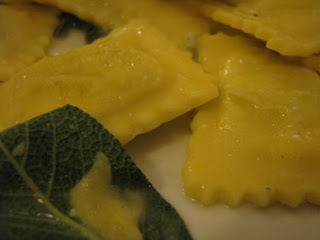 But it was a weekend, and on the weekends Fizz also has seafood, so Keith had a second course of Gamberoni: 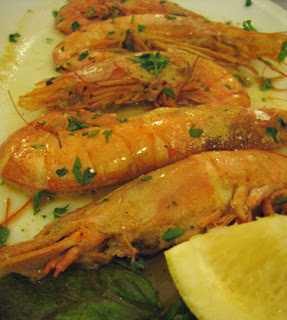 The Fizz took the taste of Greve right out of our mouths (and we didn’t even have to spit in gross spittoons). The next day we went to Citta di Castello for the Saturday market, where Tash and Nat picked up outfits, and Keith and I decided we probably wouldn’t be buying any Italian underpants soon (even those that said “underpants” on them) and scouted locations for lunch. We ended up randomly stopping in to a place called Il Buongustaio, and at first were a little nervous, due to some pastel ambiance and a lack of communication skills with the owner/waiter. However, he ended up being charming through the language barrier, and the food ended up being lovely, with highlights stopping their spotlights on the bottle of La Vi Canevel extra dry Prosecco, Keith’s Carbonara (interesting sidenote: Keith went on about how he’d never liked Carbonara in the states, but had been devouring it in the I-tal, and savoring every bite. We theorized about why, but never found a standard thought, though I think it’s better everything): 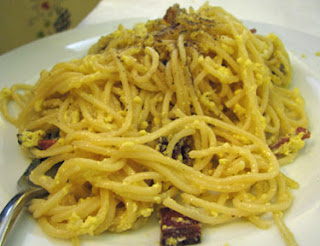 and my Al Arriabiata, or angry (or spicy) penne: 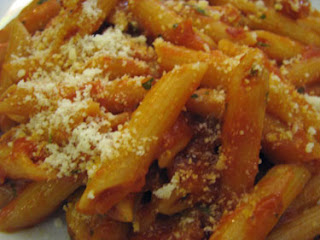 That night was our last night with Keith and Tasha, and we had such an amazing dinner that it deserves its own post. So c’mon back y’all.