Getting Medieval at Spoleto and Lunching at Trattoria Festival Here in central Italy, on the Tuscany/Umbrian border, we recently had two days of pretty solid rain (with some interludes of wacky serious rain). It was enough rain that we didn’t much leave the house for those two days, leaving us stir crazy, a bit twitchy, and close to desperate to vacate the house and hit the road. We packed up some jackets, cameras, money, and a map of Italy (the basics). As we drove towards Umbertide (which is westerly) we picked out Spoleto as our destination.

Neither of us knew much about Spoleto, except that it was decently-sized (you can tell by the font it gets on the map), lies on the edge of the Apennines mountain range in southern Umbria, and has a reputation currently for its Two Worlds theater festival (which folks travel to from hither and yon), but traces its history way way back. We drove in past the outskirts, curved around and around (following the signs for “Centro”--never a bad idea until you hit the pedestrian only lane), and once we felt close enough to centro found a place to park. As it was lunchtime, our first thought was lunching. We wandered up to the main square (past a giant poster of John Malkovitch, who was featured at the last festival), past a couple restaurants that screamed (visually, at least) “poshly overpriced,” until discovering Trattoria Festival on a side-ish street. It was a quaint spot, with a friendly staff, and filling, enjoyable food. We started with some unexpected barley salad (the had more unexpected hotdogs in it), before I moved into an ensalta mista (that had corn--I love that) and some stringozzi pomodoro (I hadn’t had stringozzi since getting to Italy, but tend to love it. It’s un-identically-sized strands of pasta, hand cut, and means “priest strangler.” It used to be served to visiting priests before the meat course, to fill them up) that was lovely, chewy, and textured: 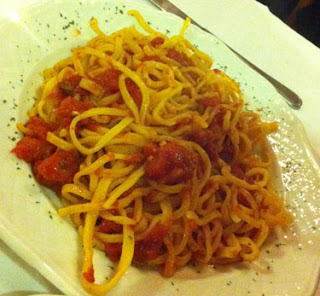 Nat started with some black bean soup (the weather outside was still a little frightful), then moved into a mushroom and truffle frittata that was solidly put together and held together but creamy and wet on the inside with funghi goodness (and it came with a little salad, too): 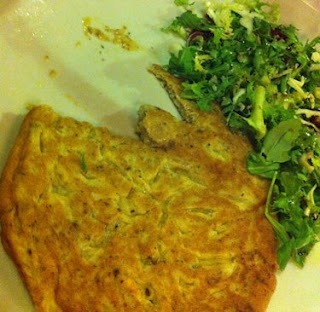 After leaving with full bellies we hit the town (the old town), hiding here and there from some showers that didn’t realize (yet) that we’d ordered rain to get outta town. Spoleto has been a settlement or town of some such since pre-historic times, but rose to power with the early Umbrians, before becoming the happening Roman town of Spoletium. After that, it went through some ups and downs, and some powerful and not-as-powerful periods. It’s held on to a classic Umbrian hilltown architecture and feel, and you can see that Nat’s ready to explore it (even if it means hiking typical hilly streets): 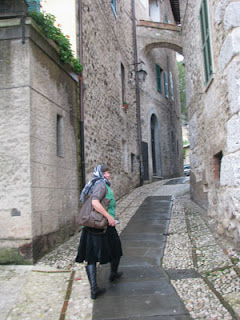 One thing we picked up on quick--Spoleto has too much to see in a couple-of-hours afternoon. We caught some serious historical hits though, starting really by just walking through town and ending up on this amazing (and well bricked, lit, etc) path around a park-like hill. It’s a pleasant amble with lots of trees and foliage, but the “boom” moment comes when you stroll around one corner and see the Ponte della Torri: 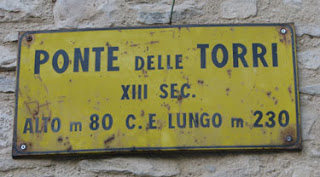 or, really big bridge (also an aquaduct, so they say): 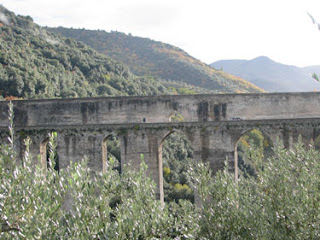 The Ponte della Torri is a medieval bridge consisting of ten gigantic arches over a huge ravine, connecting the hill of Sant’Elia and the mountain of Monteluco. Massive, the bridge dates back at least to the 14th century (probably planned by an architect named Gattapone). When walking up to it (there are stunning views with the hill, mountain, ruins, and bridge) and then even more when walking across it, the weight of the structure, and the height, overwhelm in a way—it’s hard to imagine how it was built 600 or more years ago, brick by brick. When walking it, you also get great views of the Fortress (built after the bridge but also in the 14th century, and host to such luminaries as Lucretia Borgia): 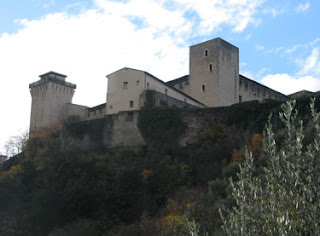 On the other side of the bridge is the large hill or small mountain of Monteluco, which is heavily wooded (with holm oak among other trees) and was once danced on by pagan worshippers celebrating winter, spring, summer, and fall. Post pagan, the mountain has hosted a number of hermits and hermitages (with hermits in them), as well as a little castle of its own: 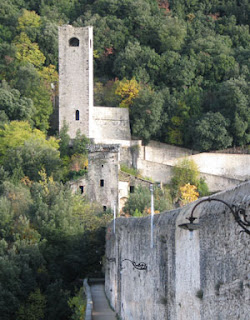 While both sides of the bridge are amazing, the bridge itself is the highlight of this panorama and when the sun’s shining, it’s possible to feel you’re back in the 1400s with no car to go back to or cell phone to answer: 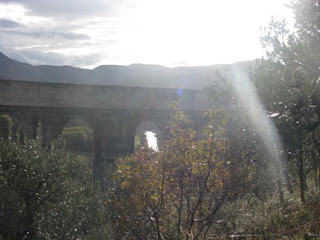 Our next (and last) stop in Spoleto was the Duomo (the bell tower is under construction, which in a selfish way is stinky, but in a worldview way is good, since I’m all for historical monuments getting taken care of instead of forgotten about and then torn down for condos): 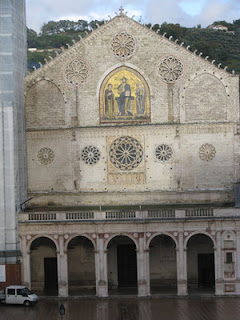 Built on a Roman site with Roman building materials still seen in small spots, the Duomo, or the Cathedral of Santa Maria Assunta, traces most of its creation to medieval times. I have to apologize, but my favorite part of the Duomo is the apse with frescos done mainly by the artist Flippo Lippi, frescos I didn’t get a picture of to post. Lippi died part way through the frescos, and is buried in the Duomo to the right of the frescos he started (and which his son finished). I strongly suggest looking online or in Italian art books for these frescos though--it’s a worthwhile search. The Duomo has many more worthy art pieces (including some paintings by Pinturcchio), but my next favorite pieces (also not pictured—sorry kids) are a letter written by St. Francis himself and the marble floors. The latter included many designs, and one picture that was close to my heart, naturally: 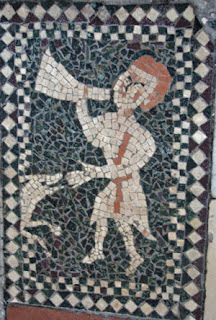 the dog marble also reminded me that though there was more to see in Spoleto, it was time for us to drive back to see our puppies—we do plan on visiting Spoleto again before leaving (hopefully). As I leave off, here’s one more picture from the Duomo. I always like finding small statues within the bigger scene on a cathedral façade, and in Spoleto I found the below gentleman holding up the major players, much like he’s holding up this blog post: 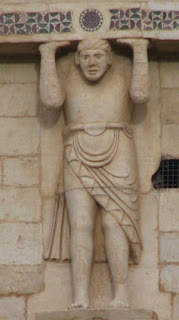