Basics: We’re Moving to Italy and Taking the Dogs 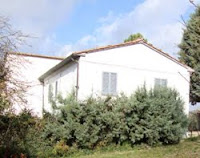 After about 11 (A.J.) or 12 (Natalie) years of working hard at multiple jobs (which we did enjoy, by and large), Nat and I decided to move to Italy for an extended break, which we’re calling our pre-tirement, as we know we’ll have to work after this break. And this blog is about that pre-tirement (and we’ll talk more about the whole pre-tirement later, too), and about taking our two little 80 pound dogs with us to Italy, and about Italy and the Niccone Valley, which is where we’re staying, and a lot about Italian food and drink, which we love. But I thought the first post should just be about the basics. So, here they are.

Starting October 6th, we are staying at a house called Cielo Chiaro, which means “clear sky” and is owned by the people who run Amici Villas--they’re folks my wife and I have rented from every other trip we’ve had to Italy (5), a nice British couple that rent Italian villas and apartments owned by local Italians and themselves. So, they’ve been very helpful. And they have a dog, named Oscar, so know where the vets are, which is also important. The Niccone Valley is an area right on the border of Tuscany and Umbria, though maybe 1 or 2 miles over the mountains from houses/apts we’ve actually stayed at in the past (that area is called the Morra Valley—all these valleys due to it being a hilly and valley-y area). It’s probably 1 to 1-1/2 hours from Florence, depending on traffic, and maybe 30 minutes from Cortona. The closest little village is Lisciano Niccone, which we’re a mile or two from (our house is a bit rural).

The best pizza place in the world, Nestor’s Pizza, is about 20 or 30 minutes away, and you can read a bit about it on this blog (which is a blog by an English guy living right in the area we’ll be in—he even self-published a book of hikes in the area, a book we now own). I’ve also written more about the Morra valley and general area (on my booze-ier blog Spiked Punch), though we won’t be in San Leo Bastia (the village I mention), but a bit south.

As far as what we’ll be doing: well, spending a lot of time at Nestor’s. And the other various restaurants in the area. The market in Umbertide (mentioned in the Spiked Punch blog post I referenced above) is on Wednesdays, so we’ll be there for that every week (and will post about it here). The retro flea market is in Citta di Castello on the third Sunday of the month, so we’ll do that then (and post about it here). I suppose drinking Aperol, reading, and relaxing will fill in the time outside of those moments.

Also, the dogs will learn how to hunt truffles (in my mind) and boars (in theirs). And I’ll let you know how it goes. So, come back and see how our adventure progresses (and read some Italian poems, and get some Italian recipes, along the way).
Posted by A.J. at 10:45 AM 3 comments: