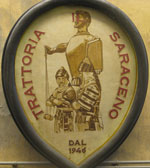 On the first Sunday and the preceding Saturday of every month, the city of Arezzo hosts an antique market, which we’d heard was the “grande dame” of markets. Of course, we wanted to visit as soon as possible, so last Saturday we decided to head out and get our market on (we’d been to a number of markets already, but heard this was different). But we had a double reason for heading to Arezzo—our pal Lora (married to pal Jim) from Chicago had told us that her cousin owned a restaurant in Arezzo, and we wanted to visit there as well.
Arezzo is a pretty large spot, about an hour from us on the way to Florence. It’s a very old city, and at one time was a decent power in the Italian city-state landscape, warring with Florence and Siena, if never quite as much a player as the former. Also, it was home to some good artists, including Vasari (who wrote the Lives of the Painters as well). Today though, it’s a contradiction. The inner, old city (which we’d never spent much time in previously) is lovely, but it’s surrounded by apartment buildings (some that are downtrodden and crumbly) and strip malls and shopping centers (we’d had to drive through the outskirts numerous times, and hadn’t enjoyed it in the least). Today, we wound around the outskirts and a ton of traffic before scoring a parking space right on the edge of the centro. We walked up the first street we came to heading in, a street covered with booths for the market. At first, we thought the market was on this street only, but we were completely wrong: the antique market spread through most streets in the old centro, emanating from the Pizza Grande (which itself was packed with antique-ers): 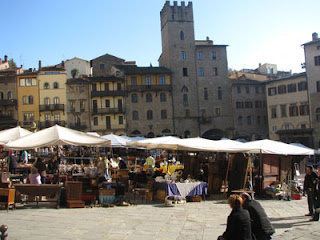 The wares for sale covered a wide range: really nice old furniture, pricey paintings and other art, books from many years past, lines, porcelain sculptures, jewelry, and more. One thing was consistent with about 95% of the antiques. The pricing, which was fairly high. This was streets of genuine, collectable, antiques. Sprinkled within were, like at a good antique market anywhere, less pricey artifacts and smaller treasures, and we browsed for quite a while, but then realized it was lunchtime, which meant time for us to stop at Trattoria Il Saraceno. Lora had told us to ask for Virgilio and/or Olga, her relatives:

Once we grabbed a cozy table in the corner, we asked about Virgilio and Olga, but it turned out only he was in for lunch. He came by and was a very kindly, affable Italian gentleman. Even though he didn’t speak much English, and our Italian is still coming along, we talked for a bit, and then we broke out the “we’re vegetarians” admitting, and he walked through what we might like for lunch. While waiting for lunch, we looked around Il Saraceno, which was pleasant and welcoming and boasted maybe the biggest jar of biscotti I’d ever seen: 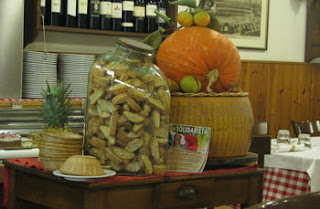 While weighing out food we had ordered a glass of rosso neuvo, or new red wine. It was very fresh, both on the tongue and in how it was bursting with flavor—a great accompaniment to lunch (and the second glass was great with the end of lunch). Nat had a bit of the mysterious look to go with the bright wine: 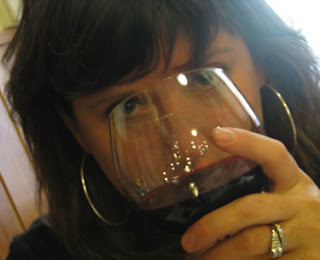 We started with an amuse bouche (well, it seemed much like one, in that it was brought to us even without ordering, and was an incredibly tasty way to get started) of some spinachi bruschetta, and then moved on to our main (we both had the same), polenta funghi. I’d been craving polenta for weeks, but hadn’t been able to track down a veggie version yet. This was delicious polenta too, creamy but without losing the texture, and with juicy mushrooms in the middle. Very good, and very warming (it’d been a chilly morning, though the sun was out by the time we left lunch): 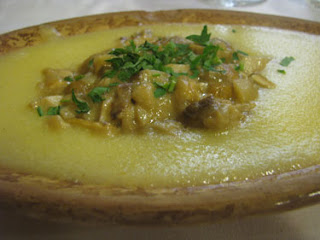 As you can see, I cleaned that polenta right up: 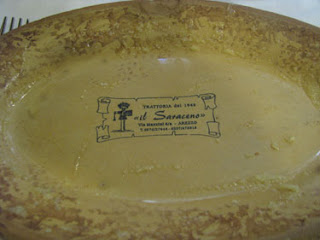 We also had an array of Contorni (or side dishes, or post main dishes) after our polentas. For me, an ensalata mista and some really nicely roasted potatoes with strings of fennel and roast garlic, and for Nat, fagioli pomodoro, or beans in tomato sauce, which she topped (as I did the potatoes) with green fresh olive oil: 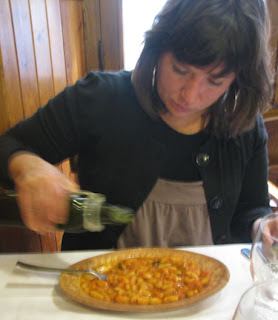 We also met some friendly Americans from Denver who were sitting at the next table, and who had been staying outside Cortona for a month. Sadly, I forgot (or forgot to ask) their names, but if they happen to read this, thanks again for the great restaurant recommendations. After eating we were ready to hit the market again, this time with an eye on unearthing some bargains. Nat may have made the best find with her chic ruffled long coat (which looked almost like something Vince Noir would wear), but I was pretty happy with the 1950 Cynar add I uncovered, and the antique medical instrument (she’ll have to tell you what it’s for) Nat discovered was cool as well: 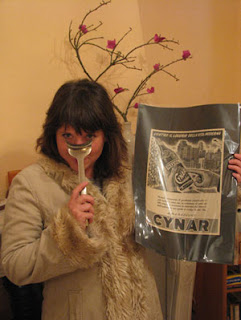 If you get the chance, stopping by the Arezzo market is well worth checking out, even just to browse. Just be ready to deal with the city traffic, and be sure to put Trattoria Il Saraceno on the plan for lunching or dinner-ing.

*See all Italian restaurants
Posted by A.J. at 8:35 AM