I haven’t had a lot of recipes here on the Six Months lately, not because we haven’t cooked at all, but just because I’ve forgotten to take pictures, or had time to write up said recipes. But I thought a recipe would fit in well in to Five Meals, Five Days and luckily we’d recently made an absolutely delish (and easy-to-make) dish for lunch the other day: artichoke piadinas. Piadinas are the lesser known (in the states, at least) Italian sandwiches (trailing their pal the Panini), utilizing a thin bread that’s somewhere between a flour tortilla and Indian naan, though that’s not doing the piadina justice, because they have a wonderful chewiness without losing sponginess that's hard to explain. If that makes sense. They’re usually available in bars, but usually with meat a-poppin', so for us veggies making our own is best. For this version, we used the artichoke skills picked up in our Calagrana cooking class. First, we cut off the stems to about 1-1/2 inches from the bud. Then, we shucked the outer leaves, all the way until we got to the tender inner leaves (with just a few layers of leaves left), and then we peeled the rough outer skin off the stem and leaf-to-stem-connecting-area (not sure what that’s called). Then, we cut off the top inch or two of the remaining leaves (just the top of the leaves). Then sliced the artichoke, leaf top to stem, into half inch or so slices. Nat added tomato to her sandwich and said it was “the awesome.” I disagree, since mine was obviously the best (just look at it): 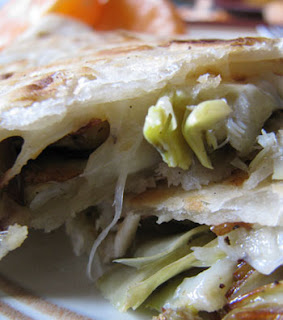 Ingredients:
2 tablespoons olive oil
4 artichokes, peeled, shucked, sliced
2 piandinas (or tortillas, or naan even)
1-1/2 cups cheese of your choice (one that melts nicely)
Five cherry tomatoes sliced in half (optional)

Directions:
1. Add 1-1/2 tablespoons of the olive oil to a large sauté pan over medium-high heat. Add the sliced artichokes and sauté for five minutes or until just tender, stirring often.

2. Remove the artichokes from the first pan. Add the remaining olive oil in equal parts to the original pan and to a second large sauté pan, with both pans over medium-high heat. Add one piadina each to each pan.

4. Cook the piadinas until the cheese is nicely melted, flipping over to ensure browning on both sides.