The Meat Is On: Or, Shane Farmer is Here

Pal Shane came in to town a couple days ago (hence the lack of posting—we’ve been touring the countryside with said Shane, as well as eating a ton and drinking half the wine in the Upper Tiber) and has been eating up the animals of Umbria ever since. Since we don’t tend to have lots of meat photos here on the Six Month blog (Nat and I being vegetarians in Umbria after all), I thought I’d give the meat-eating readers a taste of Shane’s first few meals—all of which were grigliata mista, or mixed grill. He started with a double dose of pork combined with a side of cow at the Bar Fizz: 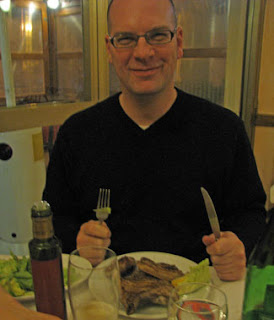 Then headed to a triple dose of pork (liver, sausage, chop) at the Grotta Azzura in Norcia (a post about Norcia soon, promise), which I photographed a little blurrily, due to having to aim over my risotto: 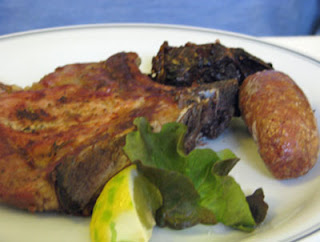 To round out his trio of mixed grills, he had a multi-mix of pork and beef with too many cuts to name at Mencuccio: 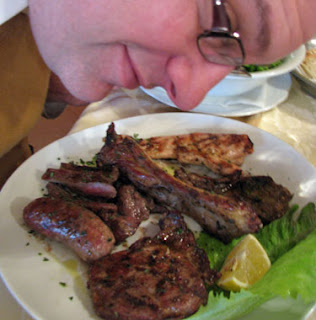 It’s a wonder the creatures haven’t tracked him down to stop his meat rampage.
Posted by A.J. at 7:22 AM