As mentioned below, we recently spent a great morning and afternoon in Assisi. Naturally, if we were there morning and afternoon, we had to have a stop for lunch in the middle. At home, we’d looked up a couple potential eateries, but completely forgot the piece of paper they were written on. It was a fortuitous and tasty forgetting, though, because we ended up wandering around a bit longer than we probably would have, stopping finally at a place called al Frantoio. At first, we mainly picked it because it boasted a fine and sunny view (it was quite a chilly December day): 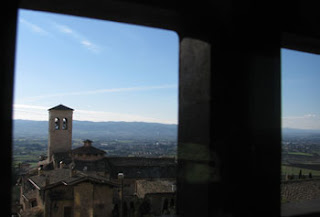 The food, though, quickly became the star of the lunch, and the reason we will probably return for more food when taking folks to Assisi. Nat’s sister Christie and mom Carolyn were also with us, which means there are a few meat pics, too (though one warning: the agreeably warm sunlight, while cuddly, didn’t help making memorable photos when shadowing through the windows). I started with an outstanding truffle frittata, which let the earthy truffles take center stage on top of a wonderfully firm-on-the-outside-gooshy-on-the-inside frittata: 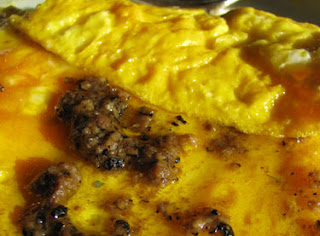 Nat started with a rich, creamy and chewy (due to the main ingredients), lush, fava bean and barley soup topped with a small slap of the sharp local olive oil: 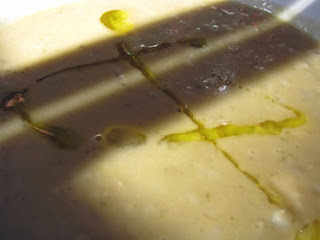 For my pasta, I went with the stringozzi (or priest stranglers—maybe an odd choice in Assisi, but wow, it was good, with the pasta at the right stage of chewiness and the stringozzi’s odd shapes adding texture) with chunky meaty fresh porcini: 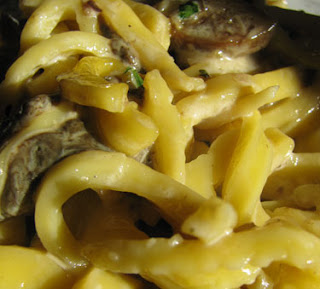 Nat had homemade tagliatelle topped with a double dose of cheese and a hint of cream: 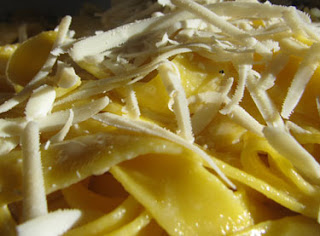 Christie (after having a pasta similar to Nat’s to start) had (on the waiter’s suggestion—super friendly waiters, by the way) chicken cutlets stuffed with local favorite chestnuts: 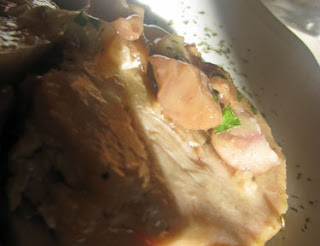 while mom went for the serious meat plate, the solo sausages (by all reports--fantastic). Carnivores, start your drooling: 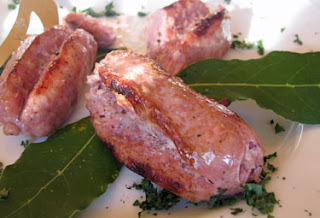 *See all Italian restaurants
Posted by A.J. at 9:00 PM