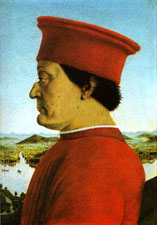 We live in Umbria, but only by a few kilometers (a few the other way, and we’d be Tuscans). Because of this, plus the fact that Umbria is the Midwest of Italy (in a way), and full of little hill towns, most of our visits have been Umbrian-bound (with a few Tuscany hits and one big stop in Emilia-Romagna). The other day we broke the Umbrian chain, however, and headed to the province on the other side of Umbria: Le Marche. We picked it because change is good, because there’s always something interesting around every corner in Italy it seems, and because Le Marche is pronounced “le markay,” which is very continental in my mind. So much so that I think I’m going to start calling pal Mark (who’s the best commenter on this blog, and who is also very continental) Le Markay. When deciding where in Le Marche to go first, it wasn’t really a tough choice: Urbino is it. Not that it’s the only town worth visiting (especially if you enjoy wearing tiny bikinis on the beach—there are lots of beach towns), but Urbino is the artistic capital of Le Marche, which is a hook I find hard to resist. It being lovely on the hillside isn’t a bad enticement, either: 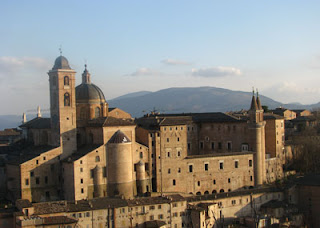 Urbino is really on the map (it’s of course literally on the map cause people live there, but “on the map” in the larger, why people stop there sense) because of one man, Duke Federico Montefeltro. Okay, the town is also the birthplace of hotstuff artist Raphael, and contains a university of note (we saw lots of parents and their student children walking about), but the Duke brought the Renaissance (as well as other eras of art) to town. Following a career path that was popular at one time (though you don’t see it as much today), Duke Federico was born a bastard son (as the story goes), managed to get his half-brother (who had been the Duke) knocked off, became a sort-of condotterie (or stylish mercenary general), fought for one side against the other, and then the other against the first side, until he made oodles of dough (losing part of a nose and an eye in the process, which is why his portraits, like that at the very top of this post, only show his good side), retired from the rough stuff, built (or expanded) a big palace, and then called in artists, intellects, and fellas that would laugh at his jokes, ending as a respected and renowned man of the arts.  The palace he fancy’d up had been started as a house by his grandfather, and is called the Palazzo Ducale. The more worthy-of-a-postcard side of it you can see in the above picture, but to get into the Duke’s house today you walk through a somewhat reserved and serene courtyard: 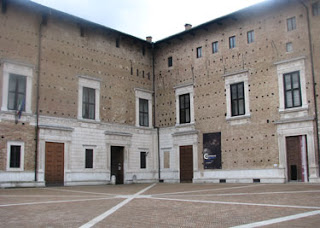 The Palazzo Ducale (or the Ducal Palace) houses the Galleria Nazionale della Marche, and has pre-during-and-post Renaissance paintings. It’s not overly jam-packed, which is a plus because A: it lets you focus in on specific works and B: gives room for the furnishings of the palace to shine—and they’re art in their own right in many cases (a number of intricate fireplaces, cornices, and eagle ceiling fixtures). Like most museums, no pictures are allowed inside, but the visit was well worth it, especially for a few key pieces. Tops in my artistic book was Room 18 (you walk room by room), the Studiolo (which may be my favorite room ever). Very small, the Studiolo was a read-and-hang out room, with paintings of “Illustrious Men” on the tops of the walls (some now stolen and residing in the Louvre—no wonder people swore at our French rental car), wood emblems on the ceiling, and the walls themselves a masterpiece of woodcarving by Benedetto da Maiano. The walls seem to be shelves at first look, with books, birds, musical instruments, weapons, the Duka in a toga, and even a squirrel, but they’re just wood. It’s amazing in its use of detail and perspective, depth and collage (and all in wood!)  No pic by me, but here’s one I found online that shows a couple details (which doesn’t do it justice, but it’ll give you an idea): 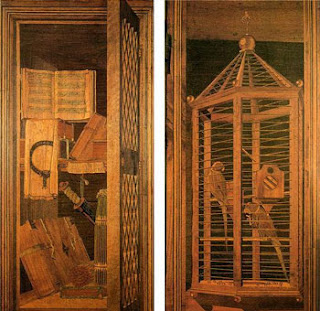 There are many doors in the palace with the same intricate woodworking, as well as a genius painting by Raphael called Portrait of a Gentlewoman (my favorite painting at the moment), and a painting by Laurana of the ideal city (fairly static, but harmonious in its lack of people). Next to the Palazzo is the Urbino Duomo, which has a marvelous façade (if a depressingly newer interior—maybe it’s just depressing because the finest painting in it has had a square cut out of it by a vandal. Students.) with statues standing out against the sky: 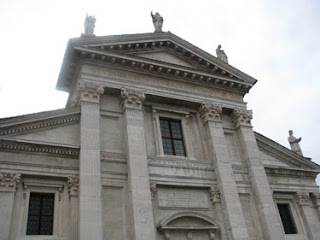 Urbino isn’t solely the palace (though it does hold a position both of prestige and cover a lot of ground), there are also many pretty and pretty hilly streets (bring good walking shoes when you come): 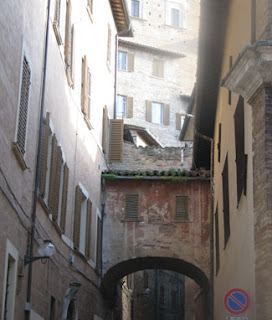 The main center, the Piazza della Repubblica is a pleasant square, well balanced and a perfect spot for people-watching, with a couple cafes, including an honest-to-goodness Campari café (I have to imagine this is the spot to sit and sip and watch for fellow students on a Saturday afternoon): 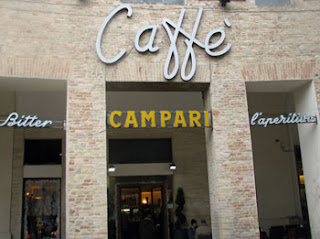 There are a number of other churches in the town, but the one we liked best and spent the most time in, was a smallish, but appealing one called the Oratory of St. John (or San Giovanni). Built by a band of early superheroes . . . okay, they didn’t have super powers, but these followers of St. John would go around helping people while wearing masks, which is pretty much the same as more modern masked marvels. The Oratory’s cozy interior is fully done up in Gothic frescos and has a heavy wooded ceiling, making for quite an effect: 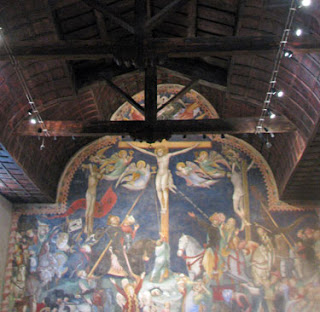 The frescos follow the life of St. John, and are overflowing with images and color, but at least half share one thing: a dog. The dog (besides making me like the small church even more) is just doing normal doggy things, playing with a kid, drinking water, jumping around, even licking himself in dog fashion: 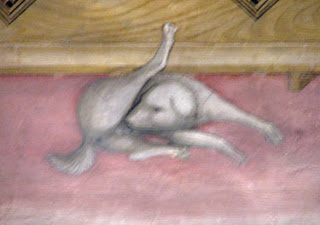 This little dog adds a touch of normality to the bigger religious scenes, makes it more comfortable, and more identifiable. It also reminded us that we needed to head home, back to Umbria, to let our own dogs out into the yard after our day in Urbino and Le Marche.
Posted by A.J. at 7:19 AM