Pistoia is an under-rated city (most books that mention it, mention that not enough people visit) in Tuscany, a leap or two west of Florence. And I have to admit, we may never have discovered it and its charms as it’s about 1-1/2 or 2 hours (depending on the A1 traffic) away, and not on the tourist maps as much as other places (and, even though we’re all about going off the beaten path, going that far to go off the beaten path is a tough choice sometimes). However, we’ve now been there twice, for three great reasons: Emanuele, Caterina, and Emiliano. Caterina was our tour guide (she’s a super-knowledgeable Florence-and-other-Tuscan-spots guide if you ever need one) the first time we stopped in Florence, and besides learning a lot about history and art she also didn’t mind our cultural questions and was incredibly nice and fun. We’ve been pals ever since, and on later trips met her husband Emanuele and their son Emiliano (who wasn’t even around yet that first meeting). They used to live in Florence, but moved recently to Pistoia, which is where Emanuele’s family lives and where he grew up. The first time we visited them, it was raining at a level which would have made Noah nervous and so none of our pics turned out well enough for a blog post. But our last visit was on a recent sunny January Saturday, when we got to visit our Pistoia pals and visit the large Pistoia market, which is laid out among the medieval streets and right up against the Baptistery (which is built in a local Romanesque style of black and white stone or tile layers): 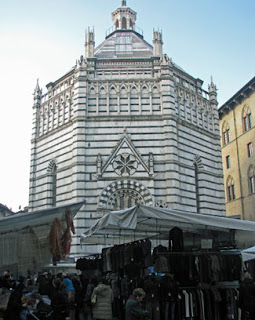 Across the square (the main square, that is, the Piazza del Duomo) and past a few market stalls is the Pistoia Duomo. Its outside is statuesque if not ornate, except for the beautiful doors, topped by a lovely Andrea della Robbia Madonna and Child: 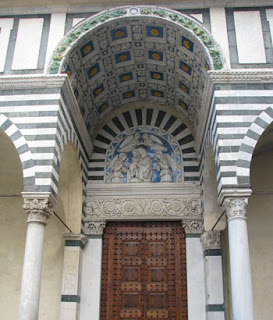 Inside there’s the crypt of Cino da Pistoia, the town’s famous poet (and teacher of Dante—the story goes that one of the students within the statue on top of the crypt is Dante himself), a number of fine paintings and sculptures, and the massive silver Alterpiece of St. James (none of which I can show you, cause no pics are allowed inside). The market itself is a type of living art, with people selling clothes on certain streets, vegetables in one or two main squares, a whole square of shoes (Nat picked up some snazzy boots), and flowers (which I hadn’t seen at a city market before) that Nat and Caterina took advantage of: 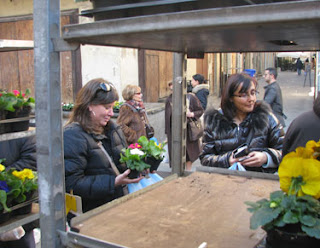 After walking the market, we met Emanuele and Emiliano for lunch (we’d seen them earlier, too). Emiliano is five, and is a bundle of energy, silliness, and friendliness (reminding me a ton of my nephews of course), and doesn’t seem put off at all by our lack of Italian—or wait, maybe he is: 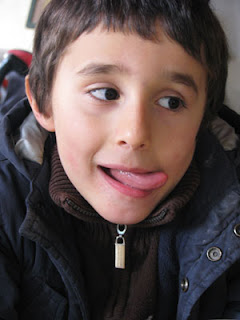 At one point, he had to get mom into the games: 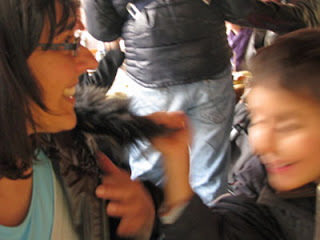 Not sure where he gets it from, but maybe dad has something to do with it: 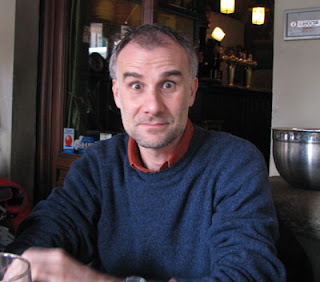 After lunch, we walked around town more, admiring the comfortable and pretty city streets, with a stop at the amazing Ospedale del Ceppo (an operating hospital that's been there since the 13th century). It has the largest della Robbia piece I’ve ever seen (this time one by Giovanni della Robbia—della Robbia works are speckled throughout Tuscany and Umbria), a tapestry of sorts, with colored panels (not seen much in Della Robbia works, which are usually white with blue) and incredible detail. The panels show the Seven Works of Mercy and the Theological Virtues (very hospital-y scenes): 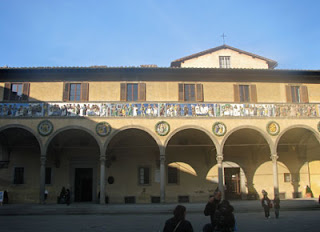 Here’s a close up, too, of one circular piece off the main, so you can see more of the craftsmanship and artistry: 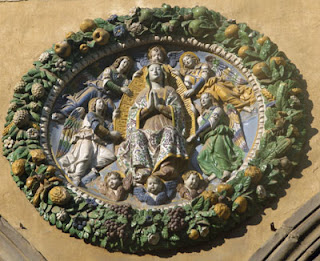 Really, I think this piece would be worthy enough for a long drive especially if you like terracotta work (but even if you just like great art). Walking back to Emanuele and Caterina’s house, we also stopped to visit Sant’Andrea, a smallish church that (not to keeping dropping the “this was also good”)was also lovely. No inside pictures allowed, but here’s the subtle outside (showing again the black and white layered motif): 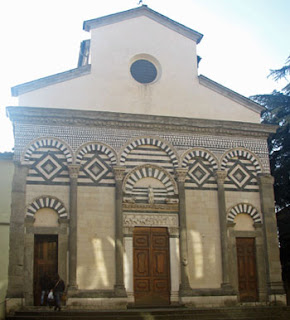 The inside was plain, but plain in an austerely beautiful way, reflecting the age of the church (not a lot of light or decorations but a lot of serenity)—it dates back to the 12th century. The one more ornate piece in the church is the pulpit, which is a very detailed sculpture more than a plain speaking platform. From the legs carved as animals to the human forms (scenes from the life of Jesus) around the top, it has an energy and depth that’s hard to convey adequately. It was carved in 1297 by Giovanni Pisano and is another Pistoian piece that’s well worth a stop. I’d better stop though, before I say too much more about Pistoia (I don’t want to over-stuff Pistoia with a bunch of tourists and ruin the relaxed ambiance after all—and it does feel relaxed, especially when you consider it’s where the word “pistol” comes from, and has a history of wild-west-ish-ness). But one final giant "thanks" is needed for Emanuele, Caterina, and Emiliano, who were (as always) fantastic hosts.
Posted by A.J. at 9:00 AM