Looking for George (Clooney, That Is) 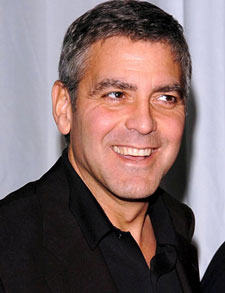 Way back when (seems like another lifetime actually) when I was sitting in my then-boss’ office at the big company telling him that I was leaving said big company for my Italian pre-tirement, after his moment of “what?” he recovered his stride and asked me the first question that came into his mind, “I wonder if you'll see George Clooney?” Which only makes sense, because of George’s well-known Italian-ness. Heck, he may be the most well-known American-Italian out there, with his big palazzo on Lake Como and now his Italian actress lady. Heck, I think a lot of Americans associate Italy with George and vice-versa now, and sorta expect that if one is vacationing over here, one should plan on at least seeing George, if not stalking his house. And though I’m pre-tiring over here, as opposed to vacationing (it’s a bit more residential, if I’m not an actual resident, if that makes any sense), I decided that maybe it’s all true, and maybe I should be seeing, or looking for, George over here. And so I began seeing George a little everywhere. Sometime about November. For example, here he is eating and looking so serious on top of the hill over Lake Trasimeno (he likes lakes, after all), in a scarf (my thought is that he’s been motorcycling, and it was chilly that evening, and we sure don’t want George catching a cold), and looking a little lean (the lake swimming has taken off some pounds—or maybe he’s doing a Colin Farrell imitation), in my paparazzi sideways snap: 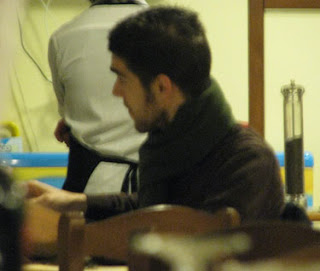 As a big star, and one with serious acting chops, and one bridging the Italian-American oceans, I figure he sometimes has to go into deep Method acting, really completely delving into a non-traditional figure, in this case one of the local wine-gulpers that trot between the two bars in Lisciano Niccone, even donning a most manly mustache to complete the character: 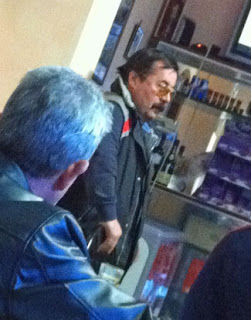 Sometimes I’d just catch him out of the corner of my eye, behind a flower, sitting at a bar like normal folk, though donning a classy chapeau to keep paparazzi like me at bay: 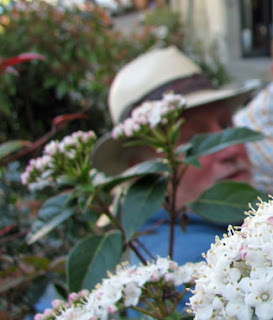 Once in a while, like any good star-obsessed American, I think maybe I’ve gone overboard in my George spotting, like when I snapped this blurry shot of George imitating Guiliano, the owner of Bar Fizz, smiling cause he’s about to make us one of the world’s most tasty pizzas (I know, I know, George Clooney doesn't eat normal pizza--but I'm sure he makes it in movies): 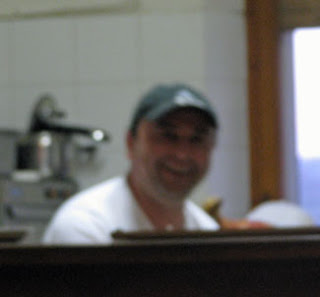 Like most great aging American actors, George can play much younger when the need arrives, especially when he’s supporting his Italian-ness, such as a recent project when he was starring as a young flag twirler just trying to get by wearing tight pants in a rough world (this project is yet to be released): 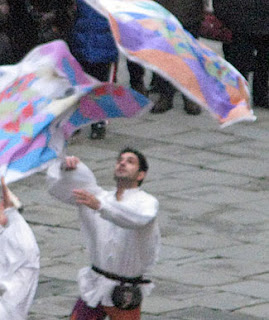 Finally, after watching for, and seeing George, pretty much everywhere, even close Italian pals started to seem like they are, after all, just George in a part. I even thought, for a second, that Italian/British friend and landlord Andrew might be George prepping a role--until I remembered that shining Hollywood legend though he may be, George certainly doesn’t have enough distinguished savoir faire to play Andrew. Some parts, I suppose, are out of the reach even of America’s most famous Italian: 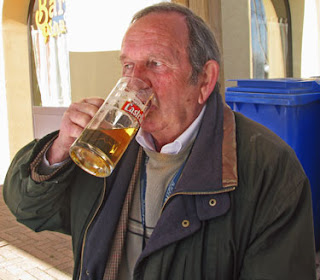