Today, our pre-tirement ends, as we leave the Niccone Valley with the dogs, some new art, some jam and snacks, some wine, some knicks and knacks, a huge host of lovely and memorable memories, and a ten-pack of fazzoletti (or tissue) for the ride to Milan (which happens first, then the drive to Frankfurt, from where we fly back to Seattle). We would have none of the above (except the dogs, who came with us naturally) without the #1 thing of the list of Top Ten Italian Things I’ll Miss: Andrew and Marianne. If you’ve never seen the blog until this post, then where have you been? If you have seen it, you’ve heard me mention Andrew and Marianne before, because they’ve been an integral and amazing part of our Italian experience, starting with the fact that they made it possible by letting us live at Cielo Chiara (which they own) for an incredibly reasonable price (hey, you can stay there, too, by the way--just head over to Amici Villas) and put up a fence around a giant part of the yard for the dogs, and ending with the fact that they’re having coffee with us as we head out of town. But between that starting and ending has been the best part, as we were able to hang out with them tons. At one point, I referred to them as our British/Italian (since they are British, but have lived in Italy for 20 odd years) Auntie and Uncle, but then stopped, cause I don’t think many people like their relatives nearly as well as we like Andrew and Marianne. They’ve been wonderfully welcoming, fun, and helpful, keeping us sane when we were having problems getting acclimatized near the beginning, helping us feel like locals by taking us to Maestro Dante (read up on my Maestro Dante blogs if you haven’t—it’s the Italian trucker restaurant extraordinaire) many times, introducing us to a big bunch of new pals here (folks like Roger and Rhiannon and Andrew’s brother Richard), and making us feel like family by having us over for many memorable meals at Cucina la Marianne. I’m just rambling, but really, if you want a dreamy Italian country vacation or pre-tirement (and who doesn’t? Only bad people I believe), then you have to get in touch with Andrew and Marianne. Thank you both, tons, for everything, every story, every meal, every beer and glass of wine, every laugh and every helping hand, and every meal on your deck: 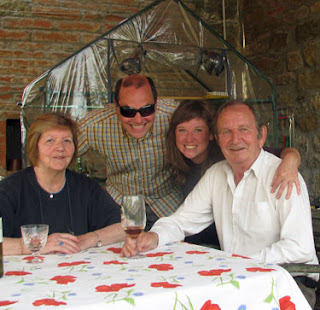 We’ll miss you both terribly. Wait! I almost forgot the third member of the Andrew and Marianne Italian family, who we’ll also miss tons, bubbly boy Oscar (here in a rare sleepy moment): 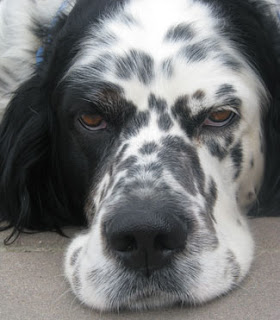