This is one moment where I hand my head in shame--with all the food and restaurant and eating posts, I have yet to post about perhaps our favorite eating spot: Cucina la Marianne. Or, eating at our wonderful landlords and pals Marianne and Andrew’s house. We’ve had a whole host of happy lunches there, sometimes eating on the deck (if warm enough) and sometimes in the wonderful kitchen surrounded by Marianne’s lovely dishes: 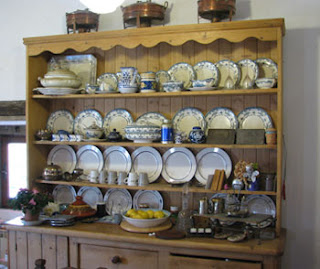 We’ve had the best (I think) creamy-gorgonzola-y sauce and pasta there, yummy veggie lasagna and creamy lush cheesy cannelloni, as well as incredible (even more so cause change is needed at times) Indian food. A week or so ago, though, we stopped by for bruncheon fare, with our charming hosts and new pals Terry and Michele. We started with some snacks and soon followed an orange and fennel salad: 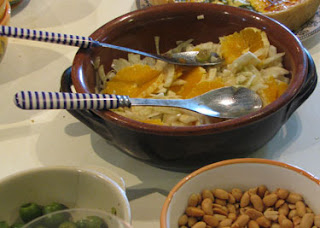 Oh, even before that, our starter, which we’ve had a couple times, and which is one of our all-time favorite Italy dishes, mushrooms in cream and garlic. The mushroom are whole and just bursting with flavor, while the cream just riches up the dish and the garlic provides accents (the picture is not doing the combo any sort of justice): 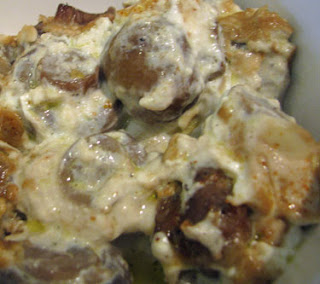 Next on the amazing menu was a roasted veggie tart: red and yellow peppers, artichoke, and olive oil with a bit of salt and pepper. Simple, tasteful, and allowing the vegetable flavors to shine, this dish would have been worthy with solely veggies, but the crust, the crust brought it to another level as it managed to be both firm and flakey: 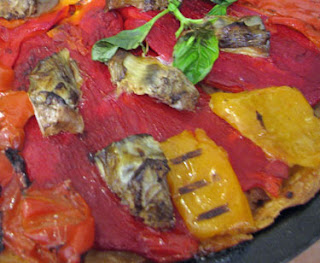 That tart, the mushrooms, and the sprightly salad would have been enough (you might think), but Marianne also served up a scrumptious quiche with asparagus and tomatoes and another great crust (and really, what a lineup of veggies between this and the tart--it’s like a whole farm on the table), with (and this was such a pleasant surprise for us Kansans) baked potatoes on the side: 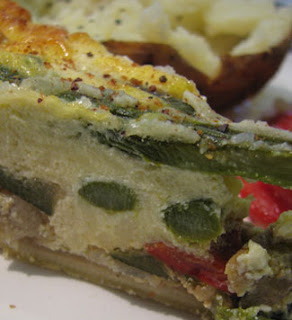 Hold on! I almost forgot (and I never forget this usually), there was also a bright, fresh, green and red (lettuce and radicchio) salad. I always like having a good bunch of greens on the side (keeps the insides healthy): 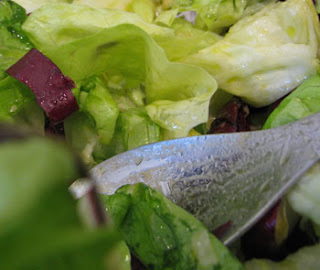 The piece de resistance (as they say) was still to come, however, a coffee cream pie that was full of coffee flavor (but not so much it overwhelmed) with yet another great crust, and served up with fresh strawberries: 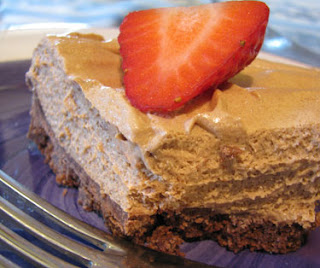 Another delicious lunch served up by Marianne, accompanied by good conversation (and, naturally, good wine).  We’re lucky Americans-in-Italy indeed. You know, now that I think about it, if you have your own dreamy Italian trip with a stop at one of the Amici Villas (all of which are in the most beautiful place on earth), you might also be lucky enough to eat at Cucina la Marianne (just be nice and see if the invite comes). I think you should start planning.
Posted by A.J. at 4:06 AM