Playing Around at Pierle Castle

Across the valley from our lovely house, perched above the town of Mercatale (around a bend or two), lies Pierle castle. Though we’ve driven by it tons (due to it being on one of the road to Terontola, where we go to take the train and pick up visitors), and though I think it’s an amazing structure, and that it is one of the many things that make this specific valley within the Niccone valley the most beautiful in the world (hey, my blog, my opinion), we hadn’t actually driven up to it until last week. Weird, I know, especially since this whole pre-tirement has been partially about not taking things for granted. But we did make it, finally. On the way up you can see the whole castle (with scaffolding) and stronghold around it: 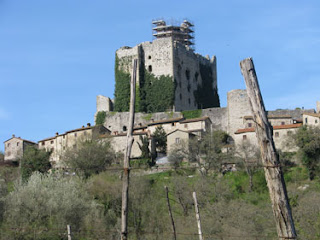 The castle as it looks now dates back all the way to the 13th century (though a castle had been there before then), and is one of many castles in the full Niccone valley. They were built in pairs, as a defensive genius move of the time, to protect and watch the area for attacks. This particular castle was watching for attacks coming towards Cortona, usually from Perugia. Of all the castles around us, Pierle holds its ancient medieval majesty best, though it’s been mostly in disrepair since about the late 1500s when some Duke of Tuscany took it out. Damn Dukes. While you can’t wander inside the ruins, you can drive up in the small village and look at the old walls, which (as it’s sunny April) are now surrounded by flowers: 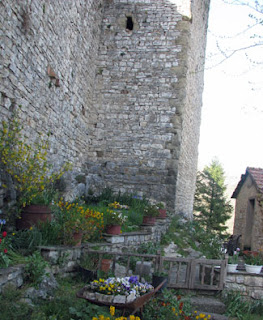 The small houses built around the castle are partially inhabited, and some in great and pretty shape (and one is for sale if you’re looking): 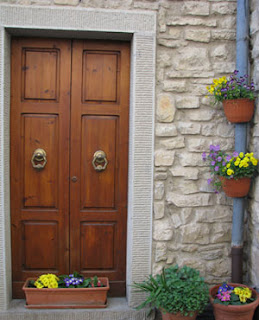 There were lots of puppies here and there in Pierle, including this fearless fella who took over the street after we drove past: 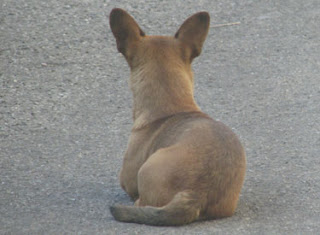 There was also a cat or two in Pierle, including this one who was hunting over the hillside, and who I though was so cute (for a cat, that is): 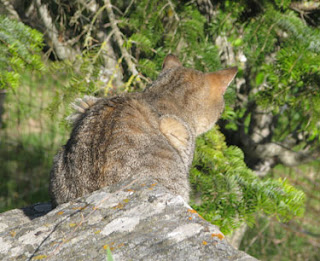 As Pierle castle naturally sits on a hillside (don’t want to miss those wicked Perugians prowling the valley), one of the best parts of coming up to wander around it was the views back into the valley, and over Mercatale: 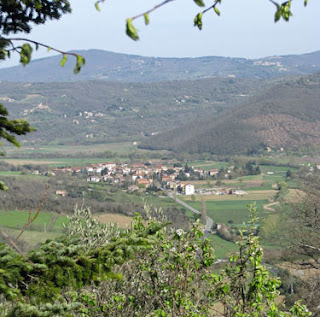