A Medieval Morning and More in Bella Bevagna

We’ve been in a stretch of amazing April weather here in central Italy, with skies of blue and temperatures rising up to the mid-70s here and there. Just delightful, and the perfect weather for a little Umbrian exploring. With this in mind, we headed to south-central Umbria the other day, specifically to a town called Bevagna. We’d both read and heard about Bevagna, so it was on our list of spots we wanted to stop at before pre-tirement ends (an infamous day that is rapidly approaching). And it was definitely worth a stop. Originally (so the history goes) an Etruscan town called Mefana, it rose to its most famous moments as a Roman town called Mevania, when it sat on the Via Flaminia, the biggest and bustling-est of all Roman highways. Then, however, the road got re-routed (bureaucrats were changing people’s lives without a thought even back then) and the town’s tourist bureau became less busy. Bevanga still contains practically the same structure from Roman times, however, as well as Roman mosaics from a spa, a small neighborhood of houses and such built on the remains of the Roman theater, a single Roman column in the town center, and more. The town center, or the Piazza Silvestri, is actually the place to start exploring, as it dates back to the 12th century and is quite lovely, with three churches, the Palazzo dei Consoli (sort-of a governmental seat, since the 1880s home to a famous theater), and a welcoming fountain: 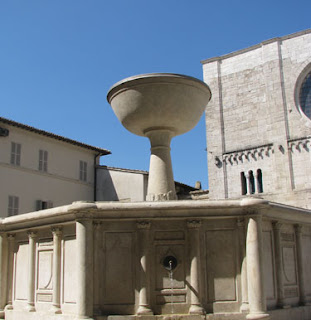 In the back of the fountain you can see one of two churches that face either across the piazza, San Michele, which was built in the late 1100s, and whose façade boasts a line of worn faces across it, people, gargoyles, birds, and animals that have watched those in the square and those going into the church for centuries: 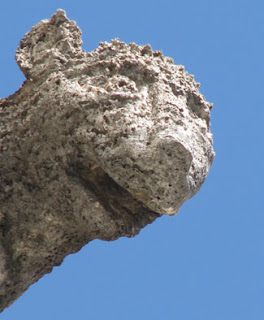 The second church in the square, San Silvestro, dates back to the same time, but has a completely different, ancient feel, due to a lack of restoration and a very plain, interior--it’s actually quite nice to step into a non-pagent’d church. Walking from the center in almost any direction on the small streets out of the center around the town is perhaps the most enjoyable part of Bevagna. They small streets still have a very medieval feel and houses and buildings accented by flowers, ironwork, sculpture, and other intriguing pieces: 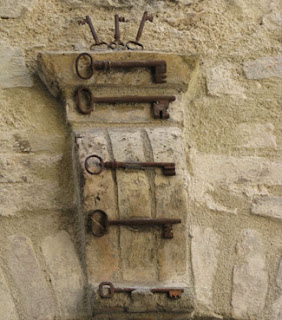 Wandering through these streets led us to Sant’ Agostino, a plain-on-the-outside, fresco’d up on the inside neighborhood church: 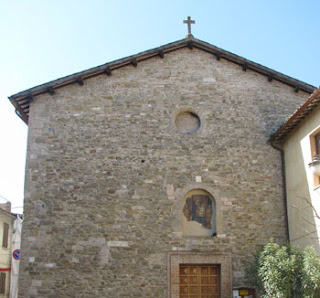 The frescos on the inside were mostly un-credited, but gave the church lots of color, as well as giving me another view of one of my favorite cautionary stories (the devil is faded, but the general line-up and action is evident): 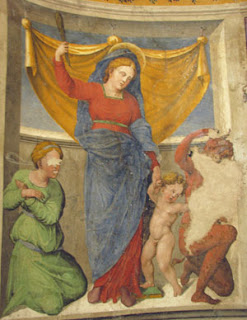 Bevanga has a famous event called Mercato delle Gaite in late June, and a scaled back La Primavera Medievale in April, both of which celebrate the town’s medieval heritage. The latter, which we stumbled into, means that there were medieval workshops open, highlighting specific medieval artisan crafts. Our first stumble into one of these was also the best, and maybe the highlight of the whole trip, as we walked around a corner and were face-to-face with a medieval-style candle-making shop: 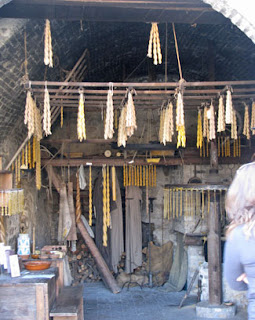 We were peeking in, and then saw a gentleman making candles in the old school style: 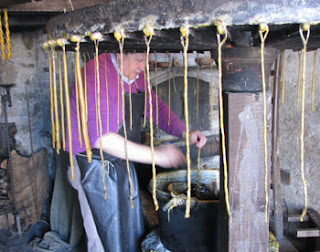 He ended up not only speaking fantastic English, but being incredibly friendly, walking us through how they used to make this specific style of candle, with duel hemp wicks twirling around each other (the duel wicks and wax method lent itself to longer burning and less smelling—which meant these candles were for church leaders and rich folk, as opposed to the poor who used sheep fat candles. Or something as aromatic). He even let Nat take a turn: 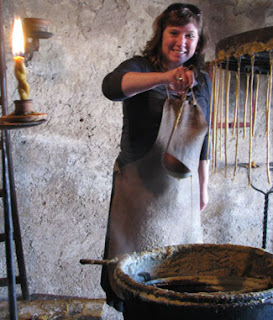 There were also open rooms set up as medieval silk-and-fabric-making and paper-making shops, and while all were cool to wander through (they were each in a different quarter of town), none had as charming a host as the candle-maker.  After stopping for a scrumptious lunch (which I’ll blog about tomorrow), we stopped into the third church on the center piazza, one set a bit to the side, San Domenico e’ Giacomo, which had some nice frescos and oldish wooden sculptures inside as well as a little dog, carrying a torch no less, tucked into one painting: 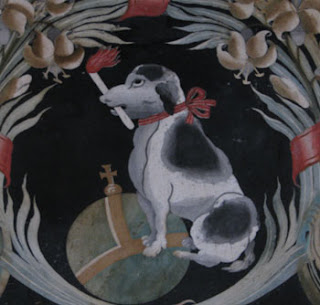 Keeping our church-and-medieval trail going, after a short stop to look at Roman bits and pieces and here and there, and more wanderings of Bevagna streets, we stopped in at the church of San Francesco (naturally, like almost every church and town in the area—Umbria, that is—there’s a strong St. Francis connection): 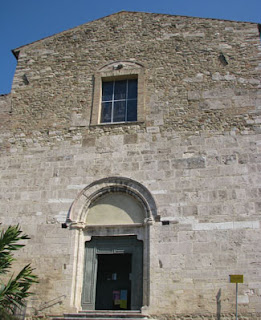 Inside, the church has the usually array of frescos and sculptures, with one out-of-the-ordinary main draw (for Francis-completists, especially), the stone which he stood on when making his famous sermon to the birds. There is another spot near Assisi where it’s said this happened, but when in Bevagna, think like Bevagnans, and so I believe he stopped to preach to the flocks on the road between Bevagna and Cannara (a spot famous for its red onions), standing on this very square stone: 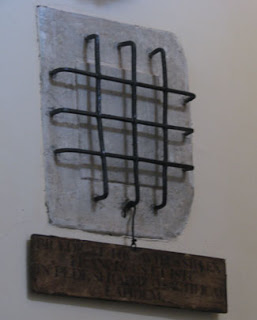 After seeing that, and enjoying a beautiful day in Bevagna, we were off in the same direction as Umbria’s most famous Saint, heading north past Cannara and back home.
Posted by A.J. at 6:17 AM