A Visit to Sparkly and Dante-y Ravenna

Ravenna is an interesting city, and one that’s had one of the more interesting histories, though it’s not told as often as some of the more tip-of-the-tongue Italian cities (consider it more Myrna Loy against starlets such as Marilyn, Carole Lombard, and Greta Garbo—the latter being Rome, Florence, and Venice in this set up). But look it over: beginnings in Umbrian times at least, home of Caesar’s largest fleet (the East Mediterranean fleet, that is), capital of the Western Roman Empire starting in 402 (which is much cooler than, say, the West Coast Avengers), the royal seat for Barbarian king Odoacer, seat of Theodric, farthest western city of the Byzantine empire and a favorite of playboy Empire Justinian, hangout and eventual resting spot for a forced-from-Florence Dante, crumbling into only an outlying suburb of Venice, and then, after WW II, emerging like a phoenix from its ashes to become both a business and industrial power and becoming a rediscovered art center due to its singular mosaics. Now, even in a completed truncated one-sentence version, that’s quite a history. And I didn’t even mention that its now the bicycle capitol of Italy (maybe even Europe), with streets designed for bike riding and the citizens taking full advantage of it. With the above said, was it any wonder that my mom and he friends Judith and Shelly wanted to visit Ravenna when they were recently visiting? Luckily, Ravenna’s only two hours (well, with Nat driving we made it in 1.45 hours) away. We started our Ravenna-ing, after tracking down a parking lot and having a quick glass of coffee, tea, or wine (depending on who was drinking—why don’t you guess), at the Basilica of San Vitale, which is covered in mosaics in the main area: 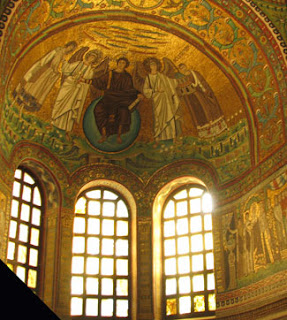 San Vitale is, after visiting a whole host of western-style churches in Italy, quite different. Very eastern, it’s a large octagon (it has a mystical feel, and if it wasn’t a church could be the headquarters of an evil legion looking to take over the world) with a dome and core area. It’s named after a mysterious (in that his actual history is somewhat of a mystery) Roman soldier who was a Christian martyr way back in the early days of the religion. The intriguing shape, and the story of the churches namesake take a quick backseat however, to the mosaics. They are massive, golden, glittering, colorful, and intricate, telling stories, showing portraits, and covering all different shapes. Walking up to them (two nice things: it’s more possible to walk right up to the mosaics and see them closely, and see how they were put together, then in many spots, and it’s also possible to take photos) you can only imagine the meticulous crafts-person-ship that went into creating them. There are more snazzy ones on the walls and ceilings (with traditional religious scenes and shots of Byzantine celebs like Justinian and his dancer-turned-wife Theodora) but also more daily subjects on the floor, like this duck (which I loved): 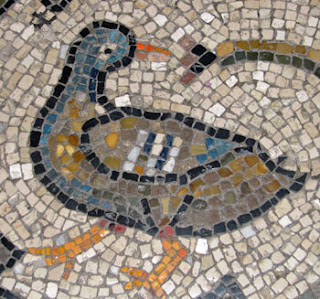 In the same complex (another nice Ravenna tip: you can get a ticket the covers the three main art spots I’m going to mention, making it simpler to get in them) is the Mausoleum of Galla Placidia. Galla was the daughter of the emperor Theodosius, and she eventually ruled Ravenna herself (meaning she ruled a lot of the West of Italy) as empress, then as regent for her young son, Valentinian III (who then was an emperor after her). She also had a Barbarian first husband (the death-metal-singer-named Ataulf). Her mausoleum is much smaller than San Vitale, but well worth a visit--just don’t be suckered into believing she's actually there. She’s with the other heavy-hitters in Rome. The mausoleum was built in the 5th century and is in the typical Latin cross shape and snuggled in to the complex under a large tree: 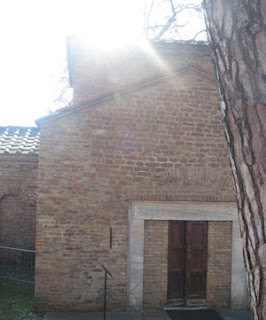 It’s dark inside, with light only filtering in gently through windows made of thin marble (really—it’s quite a ethereal effect), but once your eyes adapt to the dark, and once you get around the student group giving speeches, the mosaics are enchanting. More organic  than San Vitale, these mosaics featuring doves, sheep, grape vines, flowers, birds, cows with wings, and deer: 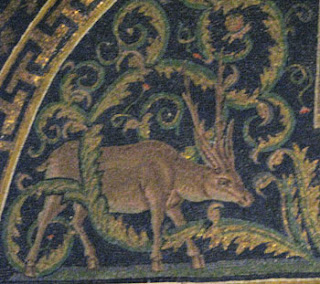 Also, there’s a mosaic of San Lorenzo, who was burned to death on a grill (handily pictured next to him if you wondered). He was a tough martyr as the stories go (he's carrying a bat for gosh sakes), who supposedly gave his torturers the business while he was being literally grilled, saying things like “you should be turning me over now dorks, cause this side’s done”: 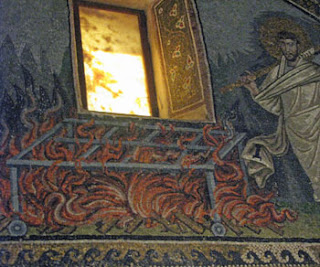 That was a lot of mosaic-ing for our morning, so after the mausoleum, we wandered the streets a bit (always watching for on-coming bicycles), had some lunch (it was tasty—hopefully I’ll catch up to it in another post, but for now I’m going to, gasp!, skip lunch descriptions), and then headed towards the non-mosaic reason I wanted to visit Ravenna: Dante’s tomb. On the way, we stopped to look at the simply charming San Francesco: 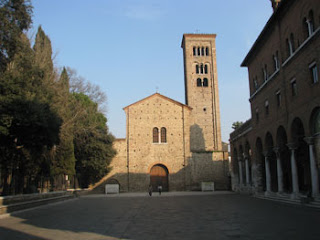 where (it was starting to turn into a poetical stars tour) we came across this plaque in honor of Lord Byron, who lived and wrote in Ravenna for a while, and who was said to have said he liked the peasants there best in the world and thought the women (which probably meant more to him) the most attractive: 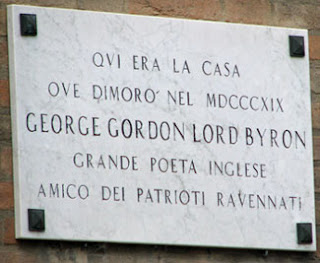 Dante is (friendly enough) buried right around the corner. Dante was exiled from Florence for political reasons in the 1300's morning, wandered a bit, ended up in Ravenna, and died on September 13/14 in 1321. For many years, his remains weren’t fancied up, first being in the above-shown San Francesco. Then, in 1483, a portrait/sculpture was commissioned, which is still in the tomb today: 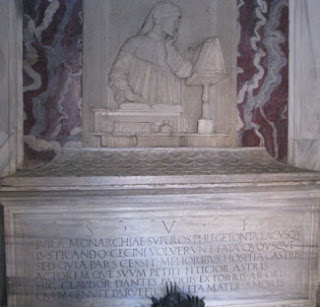 but the tomb itself was fairly mundane until the Legate (guessing that’s like the mayor) commissioned a new neo-classical temple for Dante in 1780. Now, he (Dante, that is) has his own lane, leading to his serene, appealing, resting place: 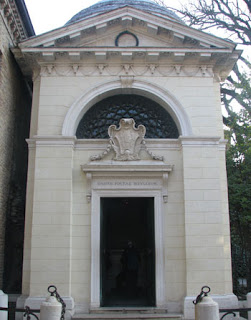 The poet’s remains did have a few more side journeys before being in the temple, however. See, the Florentines decided, years later, that they wanted Dante back (go figure: incredibly famous person gets kicked out of one city before he become famous—naturally they’ll want him back after he's famous.) As Florence was a powerful city, they convinced a pope (Leo X) to give them permission to take Dante back to Florence. However, when they showed up in Ravenna with permission slip in hand, Dante wasn’t where he was supposed to be (and it’s not like he walked away). Turns out, the friars where he was buried made a hole in his burial chamber at night and snuck him out the hole and hid him. From there, he was re-buried, moved a bit, lost when the friars moved, and then re-discovered in 1865 when someone was doing some earth moving. That’s quite a find.

Our next stop on the Ravenna mosaic tour came after Dante: Sant’Apollinare Nuovo. Less fantastical than Galla’s mausoleum, and more airy and removed than San Vitale, Nuovo (which is what I’m calling it, cause it’s cool and easier to say) dates back to the 5th century and was built for Arian  emperor Theodoric, before being Catholic-ized and renamed. The main structure is very columnar and long: 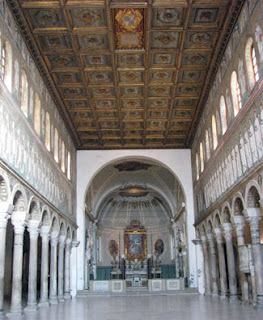 with mosaics along the side as you walk closer to the alter, small scenes along the top and larger scenes below, with the below being series of the virgins on one side and martyrs on the other (which is quite a dichotomy—always facing each other, longingly after all these years I'll bet): 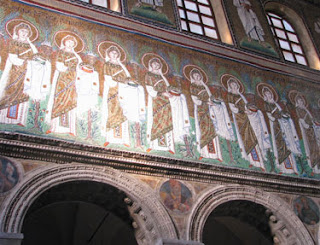 Because of the shift in faith-focus (Arian to Catholic), and because people generally want to change history to match their own world view, Nuovo has some odd, funny, and strange revisionisms. In one hard-to-photo mosaic of the wedding of Cana (where Jesus made everyone incredibly happy by changing water into wine—now, anyone who says booze and church don’t mix, go back and read the story) where the wine jugs were changed into bread baskets. Also, along the lower level at one point a number of figures were mosaic’d over because they were too Arian. No one thought that the scenes would look weird, or to remove the hands (some older artists weren’t as, um, careful as others I suppose): 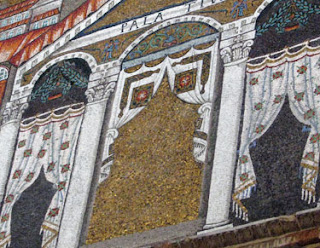 After leaving the Nuovo, we walked to the main square, the Piazza del Popolo, to check out the haps (as the hip Ravennans say). But when we sat down, we checked the clock: 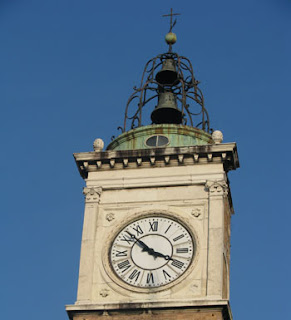 and realized we’d better call it a day and start the drive back home, day-dreaming of small golden squares and hungry dogs.
Posted by A.J. at 9:00 AM