The Mummies of Ferentillo: Spoooooky

When pal Shane was visiting, we wanted to find intriguing out of the way spots to visit with him (as well as a few of the more regular top hits), cause he’s that outside-of-the-norm kind of guy (well, we are too, cause I don’t see the point of only visiting what everyone normally visits. Not that these well-traveled spots don’t hold items worth seeing, or aren’t worth stopping at, but they aren’t the only places worth stopping at, and sometimes, many times, personal tastes are different. Now let me step off the soapbox). With this vague philosophy in mind, when he was here we made a trip to southern Umbria to see the mummies of Ferentillo (it doesn’t hurt that Shane likes to say “spooky, scary” a lot either). Ferentillo’s a little Umbrian almost-hill-town, sitting beneath two crumbling towery-castles that add the ideal atmosphere for seeing mummies: 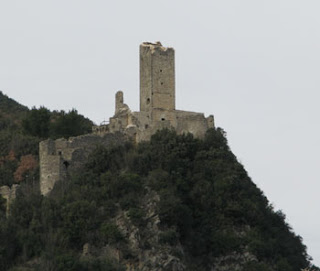 After parking, we wandered a few arching streets, and followed a few not-as-pointed-as-they-should-be signs, and found a non-descript doorway, leading to an office (or, simple room with a friendly smoking woman inside it). Once in the office, we picked up our tickets, and were led a little farther up some stone steps leading towards an old church and a clock that seemed to be leering at us as we walked nearer and nearer, each step a tick of the clock winding down: 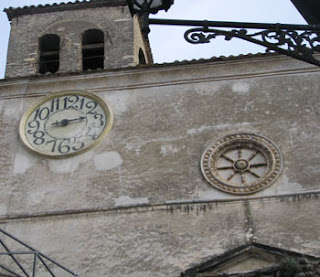 and eventually this doorway with its slightly ominous sign (only if you can’t read Italian I suppose) and dark doorway beyond (spoooooky): 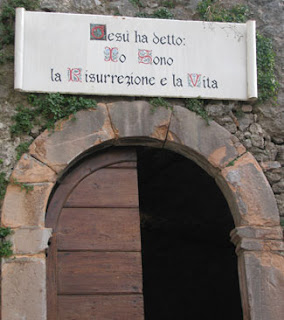 Why all these leading up pics? Well, we couldn’t take pictures of the actual mummies. You walk through the door, and then see the mummies while walking through an underground cavern-y crypt, viewing the mummies in groups of two and three while reading their histories from a booklet handed out by the above smoking woman. But wait, I haven’t even given the mummy’d overview. The mummies are mummies due to (the thought is) a particular fungus in the soil (mushrooms really do rule this area), combined with a particular soil type and geography—no one meant them to be mummies, they were just discovered mummified years after being put in a crypt. It seems both reverent and irreverent to have them displayed, but that’s part of fame (even small town fame). The assortment of folks that ended up as the Ferentillo mummies is varied (and then some). There are a few locals, dying through at least semi-natural causes, including a few infants, one still int he arms of its mother, a Chinese couple who died of cholera on their honeymoon, a Chinese gentleman who also died while here (there was a large Catholic celebration in the late 1800s which brought folks from all the world to Italy), a dwarf still boasting a beard, a lawyer killed by three local men when he corralled them when they were acting up at a festival, and one of the men who killed the lawyer but was stabbed in the process (a little mummy justice), and a few French soldiers who came over and died at the behest of Napolean. At the back (you sort of walk in a “U”) there is a massive amount of skulls on shelves (many hundreds of skulls), with a mummified eagle in the middle of the skulls rearing up as if it's almost going to take off in mummified flight. Spooky times ten. For a historical slice of town life (and the mortality therein), a view at a pretty mountainous area with a view into the deaths of some citizens and visitors that lived there, and a huge immersion into some creepy but weirdly touching history, then don’t shy away from Ferentillo and its mummies. Just don’t come at night . . . bwah hah hah.
Posted by A.J. at 9:00 AM

Email ThisBlogThis!Share to TwitterShare to FacebookShare to Pinterest
Labels: Italian Life, The Mummies of Ferentillo