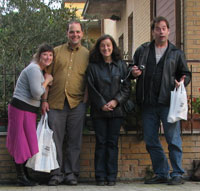 If you don’t know it, I write books in the cocktail-home-entertaining-food-poetry arena (hey, since we’re here, let me give a plug: buy my books). For most all of the books I’ve been extremely lucky in that my editor has been a genius named Valerie Cimino. She’s had a major hand in shaping every book we’ve worked together on, with fantastic ideas and guidance from the first page to the last. She’s also a big Italian-ophile, and won’t shy away from a good cocktail (or good wine), which isn’t the only reason we’re pals beyond the working relationship, but doesn’t hurt, either. Sometime in late summer, when working on a book (that comes out next fall--keep your eyes peeled), we realized her and her husband Mike were planning on an Italian vacation during the dates Nat and I were pre-tiring here. Once we knew the dates were matching up on the calendar, we decided lickety-split to meet up for a long lunch, some good conversation, and some catching up, all of which happened last week, in a lovely  town called Spello (after a side trip to a town called Cannara, which had no restaurants open for lunch, weirdly—but like many near misses on a journey, the miss ended up working in our favor).

Spello is sorta in the middle between our home in the Niccone valley and Trevi, where Val and Mike were staying, about 45 minutes from us and 20 from them. This was great for Nat and I, as we’d mostly stuck in our area so far. Spello is an Umbrian hill town that’s very picturesque, with sun-dappled streets (does anyone say “sun-dappled” anymore? They should): 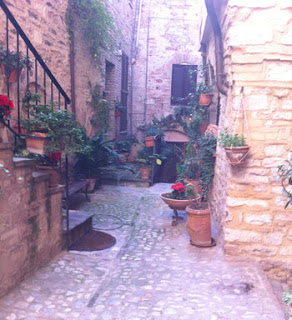 but a town definitely on the tourist trail (it’s near Assisi, which is a big stopping spot--and even more beautiful), which means more locals speak English and that there are more shops angled at tourists, which is unlike our neighborhoods. We just parked at the bottom of the hill Spello’s on, and then walked up, deciding to choose a lunch spot at random. We were about halfway up, near a lovely church with a sorrowfully austere metal horse in front of it: 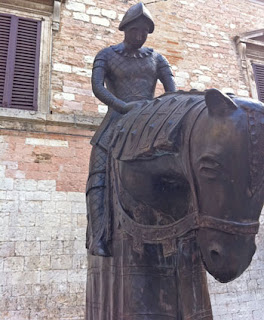 when we noticed Enoteca Properzio (an Enoteca is a wine shop, most of which also have light lunches). We were checking out the menu when a very friendly woman working there came out and started talking to us, and coaxed us in--it was a very cozy place, lots of old brick work and wine everywhere, but with a lot of modern touches, too (but not so many as to be annoying). We sat down and picked our lunches and were talking to our friendly waitress (the one who spoke to us on the way in), and she brought over the owner, Roberto Angelini. He doesn’t speak English, but was extremely friendly and debonair in an older Italian man kind of way. It turns out (the waitress is translating) that he travels around the U.S. once a year doing wine tastings and wine selling and dinners, going to NY, Chicago, LA, other cities, and Seattle. Once he found out Nat and I were from Seattle, he got very excited, and somewhere in his fast-Italian talking mentioned Amazon (Nat heard it, not me at first), which if you don’t know is where I worked for eleven years, mostly in the Kitchen Store. I naturally mentioned this fact (hey, it was a big part of my life, and I’m proud of the work I did there, even though I’m pre-tired now), and then he got really excited and mentioned “Jeff.” I thought (as one would) that he meant the big laugh and big boss himself, Jeff Bezos. He then went back to his desk and got this big folder (turns out it was a big sheaf of wine orders) and on the front it said “Jeff Wilke,” who was my bosses bosses boss (which sounds more remote than it was) at Amazon. I guess he and a few other Amazon folks had stopped by (this Enoteca is somewhat well known for its extensive wine selection and charming staff) and made friends with Roberto, and ordered lots of wine--Jeff may have even hosted him back in Bellevue--we were talking pretty rapidly so I may not have caught everything. This is quite an aside, but I just think it’s amazing how the world catches up with you in the strangest places. Here is Roberto and our friendly waitress (so you’ll know them when you stop by--which you should, if you like wine): 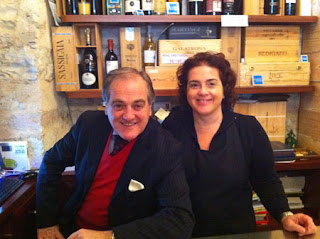 The wines we had, as well as the food, at Enoteca Properzio, were first rate. We ended up bringing home a couple memorable bottles, including a light flavorful white called Renaro (which was a combination of Pinot nero, Pinto grigio, and Pinot bianco grapes, and which would go well outside under the sun with cheese and honey, honey) and a dry, rich red called Rosso Assisi Riserva (from 1997, and being “Riserva” made from the best of the best, and all Sangiovese grapes, and sure to be a hit at a dinner with serious spices in play). Look for them at your local wineshop or online.
In my mind though, the best wine doesn’t mean more than a cup of flat diet Dr. Pepper if you aren’t having it with friends and accompanying it with conversation and laughter. This afternoon, we were blessed (by some Italian wine deity I’m guessing) with having both good friends and good wine. The best possibly afternoon, and when the fact that it took place in an Umbrian hill town is thrown into the equation . . . well, it makes for a mighty-fine pre-tirement day. Thanks again Valerie and Mike, for meeting up with us in Spello: 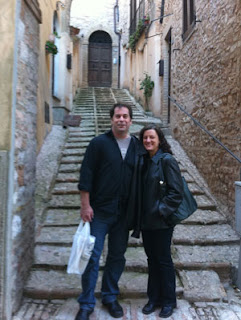