The Journey Is Half the Fun*

So, we’ve made it to Italy, and Cielo Chiaro. We actually made it a couple days ago, but have been settling in, as well as tracking down the cafes (or bars--in Italy, much the same, if not completely the same) that have Wi Fi and don’t mind us taking advantage of it. But, naturally, to make it to Italy we had to travel here by van, airplane, and car, as for some reason traveling by instantaneous matter transformation or some such hasn’t been invented yet. Scientists, get to work already.

First, we woke up at 6:30 am. Then, after packing things up (luggage, dog crates), we took the somewhat short van drive to the SeaTac, facilitated by my helpful sister Holly, who rented the van for us, then drove with us and took the van back after dropping the dogs and then us off (we hope she took it back. Though, for all we know, she may have taken the van to Mexico to look for really good Margaritas. Our cell phone access hasn’t been fantastic yet). Here’s Sookie in the van, with no idea what’s in store for her: 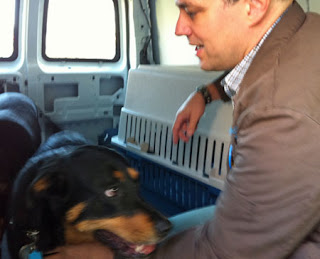 Our number one stop was we to drop the dogs off at Lufthansa cargo, and meet our handler Lee. He was a bit country, but had his papers in order, which was good. We were too stressed by this time to take his picture, sadly. While we waited, the dogs got to walk around the lovely Lufthansa parking lot about five times (which had as many cigarette butts as a Judas Priest concert. I suppose cargo handlers smoke a lot to pass the time between manic pet owners showing up). After the walking, the paper checking, and hotdog persuading (for the dogs) we got them in the crates, and then had to leave them, which was incredibly sad--Sookie was crying, and Rory was just shaking in his crate looking as melancholy as only a dog can look, droopy-eyed and droopy-jowled. And they still didn’t know they had to spend about 11 more hours in the crates. Poor puppies. Then we loaded ourselves in at the regular gate, walked around the airport worrying about the dogs, and finally boarded.

We flew Lufthansa, as you’d expect since the dogs flew Lufthansa cargo. In general, European airlines are quite a bit more comfortable than their American counterparts (not to be anti-American or anything), with amenities a-poppin’, and a full line up of movies and TV (I watched Karate Kid, Prince of Persia, Monk, 30 Rock, and Glee), decent to nearly good food (which is a ton more filling than no food I must say), and nice seats. Lufthansa, sadly, isn’t quite as comfy as British Air (my other international airline of choice), and they don’t provide you with little toothbrushes, or eye masks. But, they did give us wine with dinner, and--even better--brandy after dinner. As I was chewing my nails about the dogs the whole flight, the brandy came in handy: 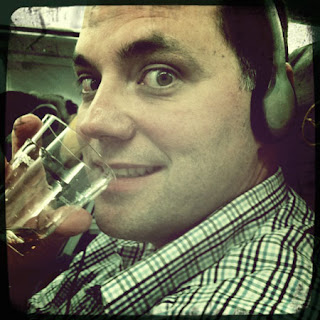 Then we got to Germany. Me, I’m three-quarters German, so don’t take any of my German ranting the wrong way. I love me some Germans, and have been amazed at the efficiency of the Frankfort airport before. This time, not so much. Once we took the like twenty minute bus ride from our plane to the terminal, it seemed no-one could tell us where to find the dogs. We picked up our luggage without a hitch (all 10,000 pounds of it), but when asking where to find the dogs, it became maddening. The Lufthansa cargo people must have a grudge with the Lufthansa airline folks (due to a company soccer match or a beer drinking competition gone wrong), cause the airlines folks didn’t have a number for cargo, or any real idea how to get there, or any desire to help us get there—and I looked crazy enough you’d have thought they would want to get rid of me quickly. Finally, we received a vague “go to Tor 25” pronouncement in a hushed whisper from one guy dressed as a janitor but wearing a Rolex. We also had to get our car, though, before the car people split, so we had to split. Nat took a cab (with a cabbie who milked her for most of our existing Euros) to Tor 25, and I took a shuttle to get the car at the Holiday Inn Express. We said our goodbyes, knowing we’d never see other again. In this life, at least.

However, the Peugeot lease gentleman at the Holiday Inn Express (in a basement room—I thought I was getting kidnapped when walking down the hall), calmed me with the cool German-ness I’d expected from the beginning, put me in our rental car, and gave me a super easy to follow map back to the airport. Whew. Of course, when I drove up to Tor 25 (anyone who can navigate the Franfurt airport without sleeping for as many hours as me deserves a medal. Or a drink.) they looked at me as if I was a terrorist. And when I exasperatedly said “dogs” to one of the gunmen (or the gate guard—it’s all a bit hazy), they waved me off, mumbling “Tor 26, Tor 26.” During all this, by the way, all I could think of was the short-lived DC 70s adventure/barbarian/long-haired-guy-in-animal-skin-underpants comic Tor (mentioning this for pals Philip and Markie B, who may be the only ones geeky enough to get the reference).

When I get to Tor 26, the fun really starts. Nat’s pacing outside, insane-like, thinking she’d never see me again. Once I assure her I’m not a ghost, she starts to tell me about German bureaucracy and how it relates to dogs. I always thought the American government had a death-grip as the red tape champion, but wow, the Germans make us look like pikers when it comes to paperwork. At Tor 26, we had to go back and forth between two offices on the same floor at least 10 times, waiting in line each time, paying Euros each time, getting stamps each time, cursing each time under our breath, trying to reason without screaming with obviously underpaid and pissy folks each time, and never once seeing the dogs. This went on for at least 40 minutes after I’d gotten there (longer for Nat before I showed), and then they sent us to another building about 10 minutes away, with an electronic badge to get through the revolving gates. Just one badge though, so only Nat could go while I waited by the gates as the most un-smiling people in the world walked through this way and that, glaring at me (again—as if I was a terrorist. Which maybe I looked like by then?). After she got back through the gates (about 20 minutes—where she had to plead for our “fighting” dogs with a woman who probably owned a pack of killer German Shepherds) we had to go back to the hellish Tor 26, wait in line at the one of the offices again, then go to (honestly) a third office to get more stamps, and where, after being asked if they bite, Nat had to put on a full body suit (no joke), and then finally . . . got to get the dogs.

The pups had been let out of their crates into a horse stable, so they got to stretch and drink a sip or two of water, but dang, they were happy to see us. And by “us” I mean the sun, the sky, the scraggly tufts of grass in the parking lot, the lamb lung we smuggled in our carry-ons, and then Nat and I. In that order. After that, it was just a matter of playing a game of Tetris with the car, trying to fit luggage, crates, and us in while three creepy Germans just stared at us from three cars away. Thanks for the help, Germans. But we were on the road by 1 (our flight was in at 9:15, by the way. A mere three hours and forty-five minutes to get the dogs. And yet some people use the phrase “German efficiency” without laughing). Then we had a short stop to get gas, and to get some sandwiches that didn’t look great but tasted divine: 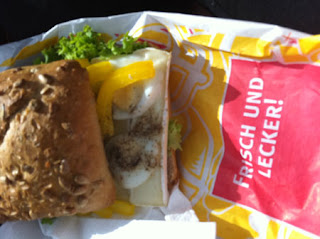 After that, it was a rapid seven hour drive to Milan through the German countryside, the Swiss mountains, and the Italian motorways. Things I learned along the way: Germany has a lot of road construction, and a lot of rest stops. Many of the rest stops don’t even have restrooms, but do have a lot of tree-y areas for dogs to run around in: 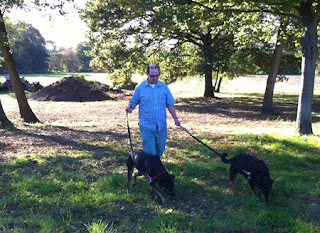 The regularity of these rest stops makes me think Germany also has a lot of gentlemen on the down low (if you know what I mean). Cause the one we stopped at was assignation central—truckers, look for kilometer 146. Other things I learned: the Swiss don’t want to see your passport, dog papers, or anything when you come into Switzerland, but do want you to buy a 40 Euro toll pass. The final thing I learned was that the waiter (I wish I would have gotten his name) at the Holiday Inn Milan-Assago (the finest dog-friendly hotel on the highway) restaurant is a champ. They have a buffet thingy going there, and he was shutting it down by the time I showed up salivating, but he still let me load up, didn’t look askance when I said I was a vegetarian, and let me take everything back up to our room so we could chill with the dogs. So, our first meal in Italy: 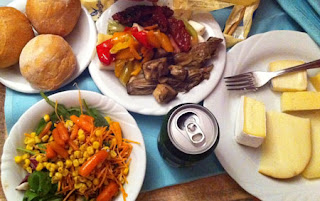 The next day, we cruised through Italy, and made it without a hitch (though with a wrong turn or two). And now here we are: 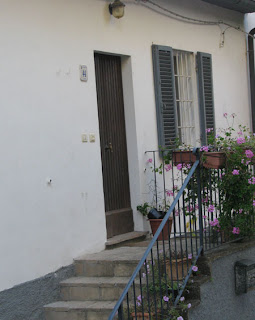 *Whoever said this first obviously never left their house.
Posted by A.J. at 5:11 AM