I can admit it—I have a fair share of what I like to call “punk-rock-poopy-pants-ness.” By this, I mean I often rebel against things (songs, places, books, movies, foods, shoes) that seem giantly mainstreamily popular. Usually, once I do get around to the thing, or at least 50% of the time, I’m sad about my previous poopy-pants-ness. But hey, as Popeye says, I yam what I yam. Orvieto falls into the “thing” category above, as we’d never visited it in all our trips to central Italy, until a couple weeks ago, even though it’s one of Umbria’s top tourist stops (in the top three with Perugia and Assisi I suppose, with maybe Spoleto a trailing fourth), and its Duomo one of the top two (with the Basilica of St. Francis) un-miss-able spots in Umbria for those interested in art. So, basically, I was kicking myself in the pants by my poopy-pants-ness. However, when pals Jon and Nicole said they were coming to visit we wanted to go somewhere new and so I got over myself and suggested Orvieto. The Orvieto experience starts (if you’re smart) by parking at the bottom of the tufa (or 325-meter-tall volcanic mountain) that Orvieto proper is built on (and which a town of some sort has been on due to its tall and fortuitous position since the Bronze Age) and taking the funicular up the mountain, through the forest, and then into Orvieto’s Rocca. Provided that you don’t head-butt the funicular heading down: 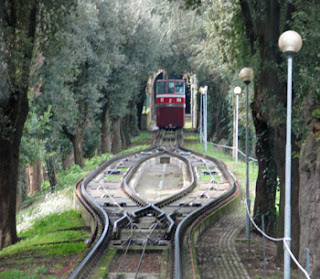 Next to where the funicular stops once you’re up up up the hill (around the corner more-or-less) was our first stop: the Pozzo di San Patrizio (or well of St. Patrick)—a good first stop especially if you’re going towards it when the large student groups are walking away from it. Named after the Irish saint who died in a cave, the well was built for Pope Clement the seventh, who fled Rome (dressed as a grocery store manager—I see him in a Safeway smock) and settled into Orvieto, worried about running out of water in an attack he felt was imminent. The well’s size is a marvel, especially considering the date it was made: 62 meters deep and 12 wide. But the real marvel is the double helix design, created to provide people and their donkeys with a path to walk both up and down without having to worry about meeting anyone going the opposite direction. Throughout the walk down, large, deep windows are cut, allowing natural light to filter to the 248 steps: 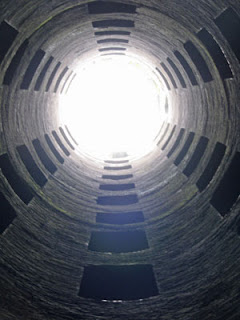 From the well, we wandered to the main event, the Duomo. It was built (well, the more entertaining story is what I’m going to tell--there might be a separate, more political story, but it’s not as much fun) after the same old story: boy becomes priest, priest starts to question his faith, specifically his faith having to do with the host (or, for non-church-oriented folks, the wafer and wine given with communion) being the actual body of Christ every time (through the miracle of transubstantiation), until, during a service, the host starts to bleed, getting on him and his liturgical table linen (or corporale), with each stain of blood assuming the face of Christ. You know, that old story. So, the Duomo in Orvieto was built (after this miracle was okay’d by the pope naturally) to house the corporale relic, starting in 1290 and finishing some 300 years later. The site was originally an Etruscan temple, then the first duomo, and it sits high in the center of town. And it is a masterpiece, almost too difficult to even take in without a few gasps of breath. It’s even hard to photograph (the massive façade, that is), but I suggest going to track down a few wide angle photos (or just getting away from the computer and going to see it), since this one only catches the top half, which is covered with mosaics: 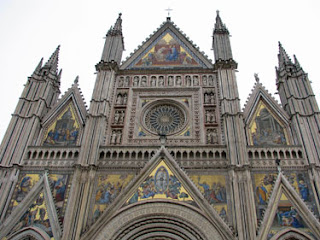 Farther down, the four pillars are covered in intricate carvings, Biblical scenes, saints, stories, and local folks. Some of the carvings are frightening, too, with a ferocious Cain braining Able once again, Adam and Eve cowering as God drives them out of the Garden, and a whole pillar whose bottom details (after passing through Paradise) a chilling and creepy hell and purgatory where people are being pulled by devils: 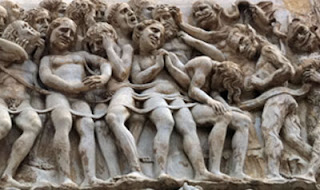 and look at the detail—amazing: 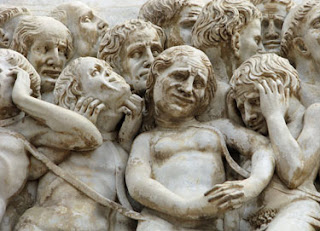 One more friendly (or at least balancing) aspect is that wine vines wind around all the sculptures (on this pillar, at least) in all the levels. This is probably more of a shout out to Orvieto’s famous white wines (that volcanic soil isn’t just good cause it’s called “tufa” and fun to say—it also provides a perfect breeding and cultivating ground for white wine grapes), but I found it nice that the sculptures were providing the sinners with a little wine while they were being tormented. The Duomo is built out of the same dramatic black and white marble as many other large churches in central Italy, and hosts a number of intriguing statues on the outside even away from the façade. With this said, don’t think the inside isn’t magnificent though—I just don’t have any photos, cause they ask you not to take them (though there was one particularly jack-ass-y American in there who thought he should have the right to take photos wherever he wanted). Inside there are a number of fine pieces spread around the church, though it seems a bit sparse at first glace. The hits come especially in the Capella di Corporale (where the above-mentioned relic is held) and the carvings around the massive organ (okay, get those chuckles out, I just said “massive organ”), and even more especially (is that proper? I’m still chuckling) in the frescos by Luca Signorelli in the Capella di San Brizio. This chapel is, well, fantasmagorically outstanding. And I’m not the first to say it (big man Michelangelo himself studied it well before he painted a little thing called the Sistine Chapel. So there). The subject of the Frescos is the Last Judgement, and they take a lot of their vigor and fantastic temperament  from Dante’s work (there is one fresco of Dante, along with Ovid and others, and specific scenes from the Divine comedy done on the lower level as well). Specific panels include the preaching of the Antichrist (picture a devious-eyed Christ preaching as atrocities happen), the rising of the dead, end of the world, Purgatorio, Paradiso, and the calling of the saved. In all the pictures, the figures are muscular, often contorted, often in great pain (being ridden around by devils, or rising whole from the ground), and always hard to look away from. Okay, that was heavy, but it is quite amazing, as is the whole Duomo, including this dog who looks a bit hungry from his perch high above the ground: 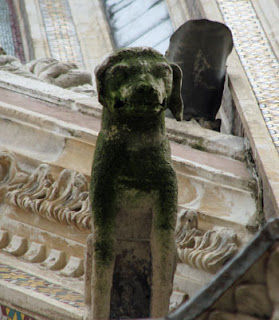 There is much more to see in Orvieto, but like the dog above, we were hungry enough, and had seen so much after the Duomo’s vast treasures that we headed off in search of a good, long, Italian lunch, and some of the much-talked-about Orvieto wine. Cause you can’t make it through a day on history and art alone (at least you can’t if you’re traveling with me, that is).