A Surprise Visit to Sansepolcro 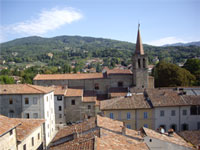 The other afternoon, we headed out to browse a few antique/junk shops we’d heard about and to visit the castle in San Giustino. The former was fun, but the latter had us running smack into (okay, we were walking, and didn’t actually hit the sign) the November and early December Italian scheduling, which has hours limited (if hours at all, and ristorantes closing for weeks at a time). So, the castle is only open Sundays. And we were there on Saturday. No castle for us. Since we were out, and wanted to see something, we headed up the road to Sansepolcro. And you know what? It ended up being a delicious, scenic, surprise.

Sansepolcro traces its history back to right around the year 1000, when two fellas named Arcano and Egidio came back from a pilgrimage to the holy land with a fragment of Christ’s tomb and thought this area was the right spot (I can understand it, too, because it is lovely, just on the Tuscany side of the upper Tiber valley) to stop and build a shrine to hold the relic. Important relics draw people, naturally, like good restaurants (maybe even more fanatically), so the town soon grew, and grew into more than just the shrine as its position near the Tuscan, Umbrian, and Le Marche borders, and on the route between Florence and Rome and between the Adriatic and the Mediterranean, made it a hot trading spot. It also was a key place for the plant “woad,” used to create dyes, specifically a shade of blue beloved by Renaissance fashionistas. As Sansepolcro is just over the border into Tuscany, none of our Umbrian guidebooks had any info on the town, so we just wandered into the old town. Funny enough (considering Sansepolcro’s history with plants—at least with woad) our first random stop was the Aboca Museum, which may be the only herb museum in the world. Situated in an old palace  of the Bourbon del Montes (you’ll remember them from MSMT), the herb museum is a fragrant treasure trove, with rooms dedicated to mortars, glass, pottery, history, an old apothecary, an old pharmacy, and more, with dried herbs in every corner of every room, including favorites such as mint: 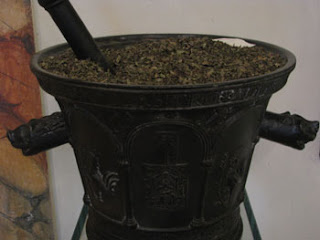 One room is packed with herbs, with different varieties in vessels of many kinds, and some hanging from the ceiling: 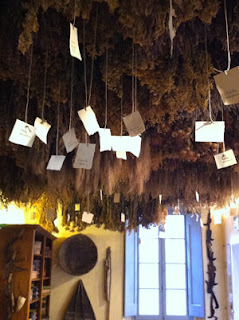 Being a fan of wild herbs (for cooking and liqueur-making), and of intriguing old medical and pharmacy equipment (as well as a fan of a number of living pharmacists), the Aboca was a welcome alternative to more traditional museums. The fact that it had a still (in the Apothocary shop): 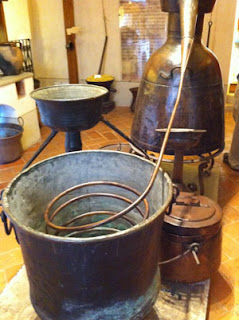 and the Heughan Gripe Cordial (Gives Rest to Mothers) made it even better: 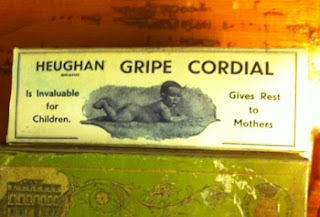 After seeing the array of herbs and sharpening up our herbal history we were (as you might expect) hungry. We wandered the streets a bit, ran into a few more early winter closures, and then made a fortuitous right turn into Ristorante Fiorentino (which is in a pretty hotel). It was all a’bustle, packed with a tour bus of about 50, and another large table (more on this table in a sec). They tucked us into a two top though, without a hitch, and soon we were starting with two delicious choices (oh, by the way, we were running low on camera batteries, so had to do duo food pics): Insalata di Arancia con Finocchio e Sedeno and Melagrana (or oranges, fennel, celery, and pomegranate) and Tortino di Riso Nero con Fonduta e Tartufo Nero: 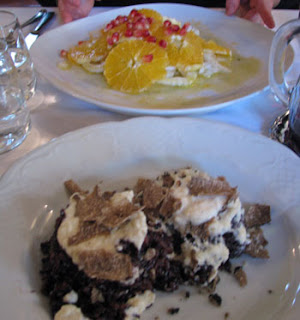 These were both amazing. The salad had a bursting arrangement of fruit and vegetable flavors, while the “tortino” were little mounds of black rice (which had a slight herby-ness) topped with a lush cheese fondue on top, and on top of that, fresh earthy black truffles. Oh my. For our mains, we shared both veggies ravioli-type pastas available: a chewier, smaller model called Tortelli di Zucca Burro Salvia and Noci (pumpkin with sage, butter, and walnuts) and a larger, regular Ravioli di Castagna con Fonduta di Ricotta (a very rich, almost-but-not-quite-dessert-y chestnut ravioli topped with a ricotta foam): 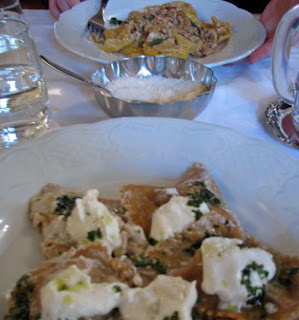 After desserts, grappas, and coffee (for Nat) we needed to walk a bit. We strolled some of Sansepulcro’s lovely lanes, and then browsed the Duomo (checking out the Volto Santo, a 7th century cross, one of three of its kind in the world, that looked eerily like it had been made three years ago), and then headed to the Museo Civico, or museum of the town. There are a variety of pieces in the museum (including some amazing reliquaries in the basement, and rescued frescos in the attic), but the main focus is on Sansepulcro’s favorite son and artist, Pietro della Francesca. An artist in the 1400s, Pietro has a number of famous pictures, but perhaps the most famous (the other choice is in Monterchi, a nearby town we haven’t visited yet) is here, The Resurrection. Showing a very in charge Christ being resurrected out of his grave over a couple of knocked out soldiers, the picture is a remarkably imposing work, a figure controlling his destiny as the artist controls his canvas: 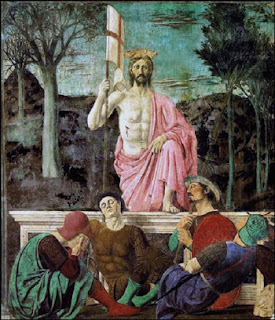 The piece would probably have been destroyed during World War II (along with the old town part of Sansepulcro) except for the fact that a British officer getting ready to bomb the town (he thought Germans were there—they weren’t) remembered that Aldous Huxley once said that a painting in the town was “the greatest painting in the world” and so held off the bombs. The Resurrection is that painting.
Now, during our visit to the museum, we heard some drumming outside. Earlier, we saw some young Sensepulcro-an gentlemen walking around in brightly-colored (think pink and grey, silver and orange) tights and Renaissance-y outfits. Figuring the drumming had something to do with these medieval new-wavers, we slipped out of the attic area of the museum onto a deck, where we had a view of the colorful lads playing trumpets and drums and doing flag gymnastics in big: 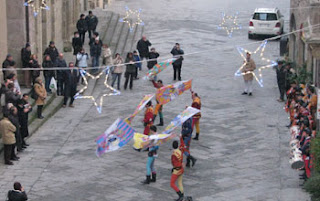 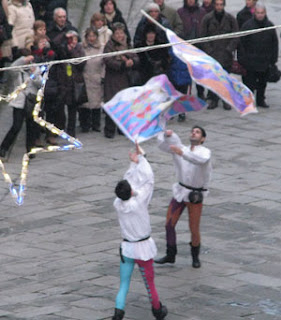 It turns out (a poster later informed us) that at the table next to us at Fiorentina (I told you above that there’d be more later—were you playing attention?) was an important man: the founder of the Slow Food movement. I believe he gave a talk earlier in the day, but then had his lunch, walked the streets, visited the museum, and had a display of Renaissance street-flag-waving for him. Just about the same itinerary as us, now that I look at it. After the flags and art it was time to leave, but not without a desire to return, as there seems to be much more to see in Sansepulcro. Next time. For now, a walk back to the car, with a quick stop in the park to say goodbye to Pietro (or at least a statue of him): 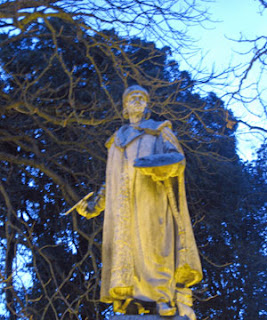