Monte S. Maria Tiberina and Citerna: An Afternoon in the Upper Tiber Valley 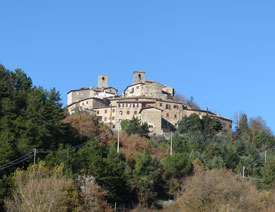 I may have mentioned this before, however, it bears repeating: our Italian house-for-almost-seven-months, Cielo Chiaro, came pretty stocked up. Not only with kitchenware, towels, and artistic décor (as you might expect), but with a bookshelf full of books (plus another half book shelf with books and movies—and a bottle of chilled Prosecco. But let’s talk about books now). I suppose Italian landlords/British charmers Andrew and Marianne don’t want us to become un-literary while here. When exploring the deeper recesses of these book shelves the other day, Natalie came across a small book, just more than a pamphlet, called The Upper Tiber Valley General Guide. 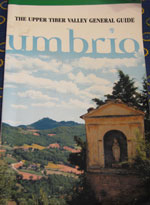 The upper Tiber valley, if I failed to mention it before (forgive me—blame the Prosecco), is where we’re living. It’s an area covering the uppermost part of Umbria (the green heart of Italy, the book reminds me), one you could if on the E45 (the highway running through Umbria) drive through in about 30 minutes (depending on how heavy your foot is). It’s a lovely spot, defined and geographically formed by the Tiber and a few tributaries, giving it a hilly/valley-y nature. Now, we’ve explored a few parts and towns of the Upper Tiber Valley (or UTV for short) on this trip and others (our own closest town, Lisciano Niccone is featured in the Guide, as are Umbertide and Citta di Castello), but the Guide has given us a more in-depth spotlight on few key towns here, ones that a visitor to the UTV might not happen across without a push or a point in their direction. On a sunny afternoon about a week ago, we decided to head out and visit two of these more off-the-beaten-path towns: Monte S. Maria Tiberina and Citerna.

We started with Monte S. Maria Tiberina (which is a mouthful to say and type), and the picture at the top left of this post is the view of this hilltown as you drive the winding and ever-upwards roads leading towards it (note: if you ever make this drive, watch out for buses coming down as you are going up. The road isn’t what you’d call wide, and the drop-offs are what you’d call steep). Monte S. Maria Tiberina (now going as MSMT, and now I’m getting acronymic) is a very old town, with folks habiting where it’s at about as long as folks have been around. In Etruscan times it was a trading post, where the Etruscans on one side of the Tiber would try to get the best of the Umbrians on the other side. For about 1000 medieval years, it was run by the powerful Bourbon del Monte family (and yes, that’s one reason I wanted to visit it, and no, there was not a store full of bourbon, which is a missed opportunity I feel), and because of this family association for many years had a license to print its own money, declare its own wars, and be one of three places in Europe where duels could be fought to the death without church repercussions. A fun spot. MSMT has a very medieval feel, in part due to there still being part of the original structure in place, including an arch you have to walk through to get into the city (and by city I mean small town) center: 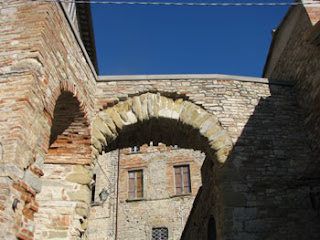 Walking around MSMT (it’s a short but picturesque walk), you can understand why a town such as this would be so important at one time: you can, literally, see what’s happening in the valleys on all sides. No armies could sneak up on you, and you could pass the word far in advance to surrounding towns where armies might be sneaking up. This hilltop position doesn’t carry the same weight today thanks to cell phones and helicopters (making for a bit of a sleepy, town-that-time-forgot, feeling), but it sure does provide some pretty vistas: 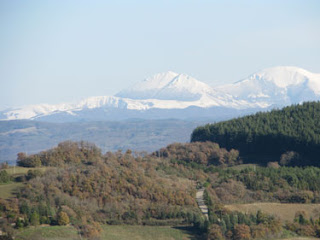 The town itself is attractive, too, with a castle (the residence of the above-mentioned Bourbon family in the 1400s onwards) that I can imagine would host a heckuva party (until someone too tipsy toppled off the walls): 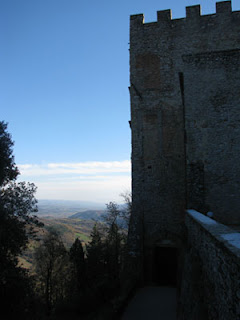 There’s just one ristorante/bar/a-bit-of-this-and-a-bit-of-that in town, which was closed by the time we were wandering the MSMT streets (dreaming of the past), but which if you’re ever in the neighborhood looks to have an amazing view from an outdoor seating area (it’s called Ristorante Oscari, named after our landlords dog Oscar I believe). You can also watch for a famous American, who gave up his fried empire to come work for the consulate: 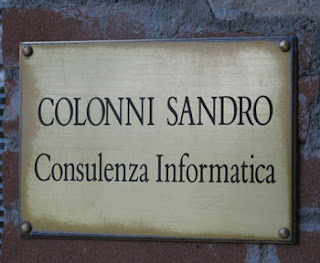 From MSMT when headed north, to almost the edge of the UTV, to visit another hilltown, called Citerna. Not on quite as high a hill as MSMT (which is 688 meters above sea level, and Citerna being 482), Citerna still provides an arching drive up curvy roads, as well as pretty panoramas when you get there. We, being first time visitors, got a little off track and ended up circling the town backwards until finding a spot to park. It ended up being lucky though, as around the first corner we walked when walking into the city we came across this lovely and worn statue: 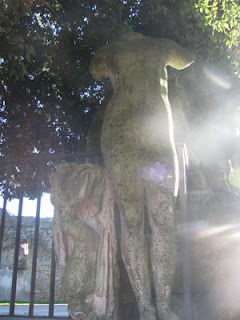 Like MSMT, Citerna traces its history very far back, but wasn’t under the thumb of any one family for as long a period of time, instead being under the domain of a number of families, many in conjunction with the nearby city of Citta di Castello. It made a serious mark in more modern history however, as Garibaldi chilled (notice me giving modern lingo to Garibaldi--I'm that way and it will probably cause any Italians reading this to shudder) there when recapturing Ravenna. This led to Citerna becoming the first Umbrian city to be a part of the new Kingdom of Italy in 1861. As our circumnavigating the city had us coming in on the south side, we first saw the Cassero (fortress), which dates back to the 7th century (with an update or rebuild at least once in the intervening years), and which still has a mighty medievalness: 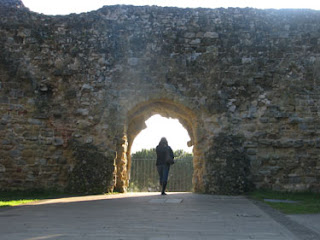 The main drag (or street) of Citerna is as you might expect named after its most famous temporary resident, Garibaldi, and is a perfect picture of a smallish hill towns center: 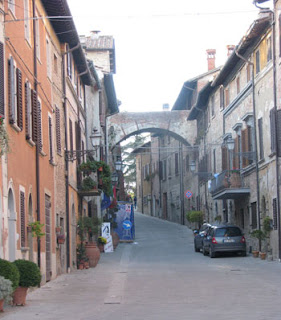 Due either to November’s lack of tourists or our bad luck, the main church in Citerna, San Francesco, was under wraps for some updates and renovation. We’ll probably come back to see it, as it’s full of art (and really, Citerna was nice enough to visit twice, as was MSMT). We did see the second church (and there was probably a third we missed), Santa Michele Arcangelo, which is more modern in the interior, but also with art worth seeing, and we also wandered into the Prosperi  house. The Prosperi’s were a well off 16th century family, and inside their house currently you can still see the fireplace that was there in the 16th (my photo doesn’t do it justice, but it’s carved with faces and figures and almost spooky in a way): 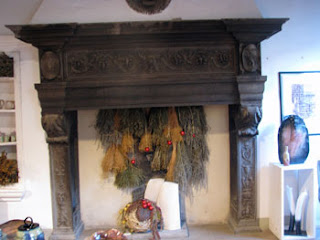 The building now houses art studios and spaces, and the room with the fireplace actually had an art showing going on while we were there with ceramics by the artist Fanette Cardinali, who was there and very friendly (I can’t say too much more or I may divulge holiday presents). After walking the town, we stopped at the café in the center to have a coffee and some of the world’s thickest hot chocolate (it was like scrumptious warm pudding), while watching two kids (about the ages of my two favorite kids, Kaiser and Coen) play soccer against a wall that has probably been there for hundreds of years, with a beautiful vista in the background: 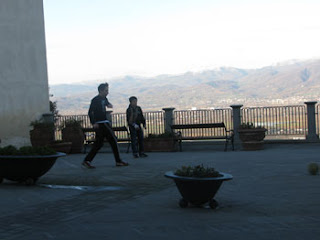 That seems to be about as right a picture of Italy as I can imagine, and a great end to an afternoon in the UTV.
Posted by A.J. at 9:00 AM